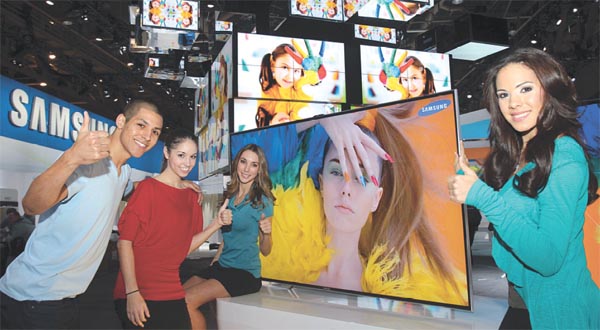 Models pose next to a Samsung Electronics 75-inch smart TV at the Consumer Electronics Show in Las Vegas. The electronics company created a “smart monument” at the show made of 164 TVs and displays.


LAS VEGAS - Global technology giants, including Korea’s Samsung Electronics and LG Electronics, will be showcasing some of their latest and hottest products at the Consumer Electronics Show in Las Vegas - which kicks off its four-day run there on Tuesday.

The Las Vegas event is the world’s largest consumer electronics trade show, and the technology on display at the venue often becomes the buzz in the IT industry for the rest of the year.

For such reasons, technology professionals, critics and fans worldwide keep a close eye on the show.

Last year, smartphones enjoyed equal - if not more - attention compared to traditional stars in the realm of consumer electronics, such as televisions.

But this year, it appears the showstopper will be the next-generation TVs.

Also ultrathin laptops, solar-powered tablets and e-readers are expected to be highlights of the show. 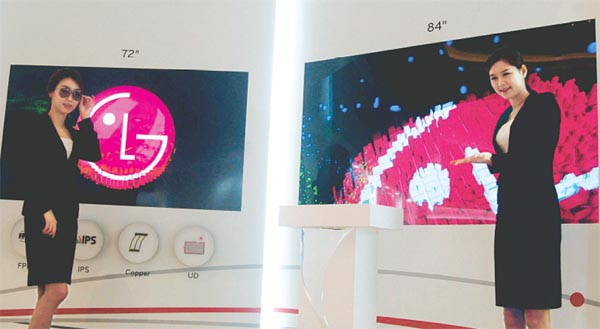 Models show off 84-inch ultra-definition TVs at the show’s LG Display booth. The TVs boast resolution four times clearer than high-definition TVs, according to LG officials. Provided by the companies


The future of TV

LG, the world’s No. 2 maker of flat-screen TVs, confirmed last Friday that it will debut a smart TV powered by Google’s recently unveiled new platform at the show, with plans to release the product in the U.S. market in the first half of this year.

This marks LG’s first collaboration with Google in this business segment.

It remains to be seen, however, if the new Google TV will get better reviews, as the first-generation Google TV - launched in October 2010 by Google, Sony and Logitech - generally failed to impress.

Samsung, the world’s top maker of flat-screen TVs, is also boasting a richer lineup of smart TVs at its booth at the show - which is the largest booth at the venue, according to organizers. Samsung’s key model is its premium smart TV that can be operated with voice or motion commands.

With a slimmer frame, about as wide as a pencil, and a U-shaped stand, its premium smart TV has a “post-Minimalist” concept, according to company officials.

Through press releases, Samsung said it will unveil a “large-sized” OLED TV, and LG said it will release a 55-inch OLED TV at the venue.

OLEDs are much thinner, lighter and clearer than LCDs. The 55-inch OLED TV will be the largest OLED TV ever, as the display has so far been used mostly for smaller devices like smartphones. Havis Kwon, the president of LG’s home entertainment division, said “We will release OLED TVs [to the market] earlier than [Samsung.]”

It seems the television makers are determined to raise the bar in terms of resolution. Samsung and LG will also display their ultra-definition TVs, sources said.

Watchers are also keeping a close tab on Microsoft at this year’s show, as it will be the U.S. technology giant’s last appearance there.

Microsoft said it will be withdrawing from the event as the scheduling of the show does not work with its own plans. It said on its blog that “Our product news milestones generally don’t align with the show’s January timing.”

Steve Ballmer, the company’s chief executive for the past 11 years, is slated to give the opening keynote at the venue on Monday night, and the focus is expected to be the company’s plans for its new software, Windows 8, which sources said will work with all smart devices, like smartphones and tablets.

Microsoft has largely missed out on the recent boom of mobile devices as Apple’s iPhone and iPad as well as devices using Google’s Android software platform dominate the market. Windows 8 “is where Microsoft is hanging its hat to stay relevant,” Phil McKinney, formerly a vice president and chief technology officer of Hewlett-Packard, told the Wall Street Journal.

Other highlights of the show

A string of ultrathin, super-portable ultrabooks are expected to debut at electronics show, which are deemed in the industry as Apple’s MacBook Air rivals, including Acer’s ultrabook, which is thought to be the world’s thinnest laptop at 15mm (0.59 inches), and Samsung’s rendition, which is thought to offer the largest storage with one terabyte.

Meanwhile, new fourth-generation (4G) smartphones will also interest fans, with Samsung and LG slated to showcase their lineup of long-term evolution devices. LTE is a type of 4G wireless technology.