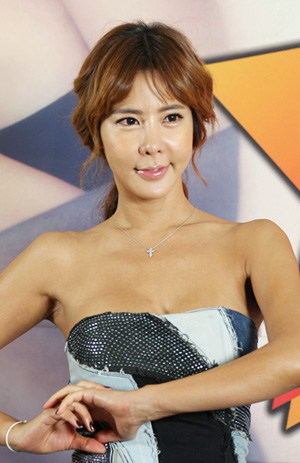 When pictures of actress Kim Jun-hee and model Kim Yong-pyo surfaced online on Jan. 10, netizens were enamored with what they thought was a picture perfect celebrity couple.

In one of the pictures, the two can be seen strolling the streets of London, casually embracing and looking content. The original photo came with the caption, “Kim Jun-hee on a date with an anonymous man in London.”

The rumors were quickly dispelled when Kim’s agency announced that the two aren’t an item. The agency further explained that the two entertainers were in England to do a photo shoot for online fashion shopping malls.

The two collaborated in the creative process in order to promote fashion sold on their individual online boutique stores.

Kim Jun-hee is famous for her short-lived marriage of two years to singer Jinu from the K-pop duo Jinusean.

Kim Yong-pyo made his debut as a model at Seoul Collection, a fashion event in Seoul, in 2007 and 2008. He shot to fame in 2009 after he appeared in the music video for Brown Eyed Girls’ hit song “Abracadabra.”