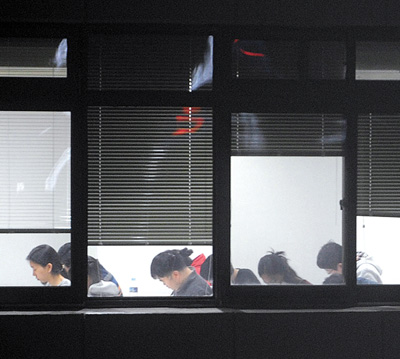 It’s dusk on the final day of the Korean Bar Examination, and parents and friends are waiting outside Hanyang University Engineering Building 1 to greet the exhausted test-takers.

Kim Seon-gwang, a law professor from Wonkwang University in North Jeolla, has traveled all the way to Seoul to lend support to 10 of his students. He smokes two cigarettes in a row despite the fact that he quit years ago.

“How could I not come?” he exclaims. “They are my babies!”

The professor’s babies are also the first generation of a new breed of lawyer for Korea after an overhaul of the system in 2009. This year’s crop is the first to graduate from three-year law courses and the first to take the brand new, four-day bar exam, which was administered on Jan. 3-4 and Jan. 6-7.

The students have a 13-week wait to find out if they passed. For this year, the Ministry of Justice has decided that 75 percent of test-takers will pass. (The exam will be graded on a curve.)

Even more fraught, there are only around 500 lawyers’ jobs in Korea, in both the government and the private sector, and almost 1,700 people took the test. Some of those ambitious students may find that their three years in law school didn’t lead them into the profession they desired. And some of them gave up good jobs to go into law.

“Gone are the days when a law license will guarantee a job,” said a second-year law student at Korea University surnamed Ahn, who wants to specialize in intellectual property law, though he’s also considering teaching law.

“Right now, I’m just glad it’s over,” said a 38-year-old Hanyang University School of Law graduate surnamed Seo. “Searching for a job is the next step.” Seo gave up a career in IT research to go to law school, but he has other options with a master’s degree in electrical engineering and computer science.

In the past, Korea’s lawyers were chosen in a very Asian way. Anyone who graduated from high school could take the bar exam, and the ones that passed were guaranteed two years of training at the Judicial Research and Training Institute and, depending on their scores there, got jobs as judges or prosecutors, in the government, or in private law firms. Generations of young men memorized law books for years to try and pass the bar, knowing they would have a secure future if they did. The quality of the lawyers was not always good.

In 2009, a new system began, modeled on the United States. The government allowed the opening of 25 graduate-level law schools, capping the total number of students at 2,000 a year. Students who complete the three years of training are eligible to take the bar exam. If they pass, they must do a six-month internship or train under someone with five years or more of legal experience. Then, they can be lawyers.

The studies before the new bar exam are more comprehensive and practical than the rote studying done in the past. And Korea also hoped to grow its legal industry through the new system and introduce a different type of competition.

The old system will be phased out completely by 2020.

But growing the pool of potential lawyers doesn’t lead to an immediate growth in the jobs available. Of the 2,000 students that entered the spanking new law schools in 2009, only 1,698 took the bar exam this month. Several hundred decided to skip it. Some decided to take civil servant exams instead while others are taking time off. And some have given up the idea of the law completely, knowing that jobs aren’t guaranteed.

A professor of law at the University of Seoul said only 40 of the 50 students he taught took the exam.

But students graduating from lesser schools, and particularly those outside of Seoul, have more worries. Around 860 of the 2,000 yearly law school seats are outside Seoul.

Jung, a 32-year-old student from Busan’s Dong-A University, came to Seoul to take the bar exam, which he called “physically and mentally exhausting,” and is confident he will pass. He’s less confident about landing a job.

“It’s not like we are from Seoul National University,” Jung said, “so I have many friends worried about employment.” Instead of competing for limited jobs in law firms, Jung is considering a career in politics. His brother also wants to be a lawyer, and he’s doing everything he can to get into a school in Seoul.

A 26-year-old law student at Chungnam National University in Daejeon, who asked not to be identified, said she went to law school with the aspiration of becoming a prosecutor. But after two years studying, she now claims that law doesn’t seem to be a “practical” choice.

“Truthfully, I’m concerned about the large turnout of lawyers,” she said.

Japan also overhauled its law school system in 2006, and Koreans are watching how that system is going.

According to the Yomiuri Shimbun, 2,063 people passed the new Japanese bar examination in 2011, with a pass rate of 23.54 - and the percentage has been in decline for five years. That has law students worried.

But Japan has 74 law schools, far more than Korea, and Korea capped the number of schools and students from the start.

Ahn from Korea University said he’s not as worried as some of his classmates. “I heard that the current size of the legal market is around 2 trillion won [$1.73 billion], but that’s only the traditional legal market,” he said. “With an increase in the number of lawyers, legal services will spread beyond the fields that used to monopolize lawyers. The legal market will become normalized.”

Professor Kim from Wonkwang University worries for his students as they finished the grueling exam. “For the sake of employment, there needs to be regulation on the level of difficulty on these exams,” he said. “But it is just the first year of the new system, and it was a learning experience.”