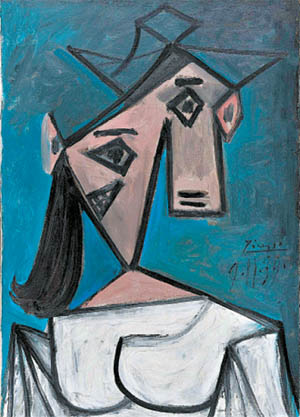 This 1939 painting by Pablo Picasso was stolen from the museum Monday. [AP]

“Woman’s Head,” a 1939 oil on canvas, had been given by Picasso to the Greek state in 1949 in recognition of the country’s resistance to Nazi Germany, the police said in a statement.

“Mill,” a 1905 oil painting of a windmill by Dutch abstract artist Piet Mondrian, was also stolen, along with a sketch of St. Diego de Alcala by 16th century Italian artist Guglielmo Caccia, better known as Moncalvo, the police said.

Authorities said the thief, or thieves, had knocked out the alarm system and forced open a balcony door at the back of the building, which is located across from one of Athens’ top hotels.

A guard told police that a burglar alarm went off shortly before 5 a.m. and that he saw the silhouette of a person running from the building.

He told police that he ran after the thief, who dropped another Mondrian oil painting, “Landscape,” a 1905 painting featuring a farmhouse, according to the gallery’s Web site.

The break-in lasted only around seven minutes.

The police added that the guard had been distracted earlier in the evening by alarms that were triggered at various entry points, but when he went to investigate he found no one in the gallery.

The police said the theft occurred on the final day of an exhibition titled “Unknown Treasures” that included prints and etchings by Duerer and Rembrandt.

The gallery in the center of the Greek capital planned to close its doors following the exhibition for expansion and renovation work.

It has a vast permanent collection of post-Byzantine Greek art, as well as a small collection of Renaissance works and some El Greco paintings.

Meanwhile, a painting by Belgian surrealist master Rene Magritte, stolen at gunpoint two years ago, has been returned after the thieves apparently failed to find a buyer, the Rene-Magritte Museum said Friday.

The work, titled “Olympia” and depicting the artist’s wife nude with a giant shell lying on her stomach, was stolen in September 2009 by two armed gunmen from Magritte’s former house, which is open as a museum by appointment only.

Said to be worth around 3 million euros ($3.8 million) at the time, experts had said the highly recognizable oil would be difficult to sell.

More than two years later, a person contacted an expert working with the insurance company and offered to hand it back with no strings attached, museum curator Andre Garitte told AFP.

“They’d visibly understood they wouldn’t be able to sell it because it was too well-known,” he said. “It became an embarrassment and they preferred to get rid of it. Luckily they didn’t destroy it.”

The museum, which is again in possession of the painting, has not yet decided whether to hang it.

The daylight theft of the 1948 work was blamed at the time on two men, one of them said to be Asian, one a French-speaker, the other an English-speaker.

They entered the museum shortly after it opened and at gunpoint forced staff to lie down in the courtyard as one of the men climbed over a glass panel protecting the work to steal it.