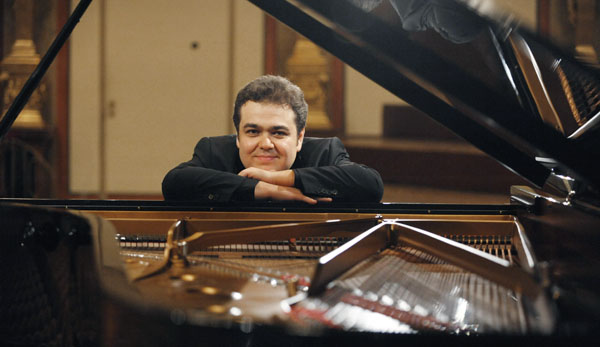 Both Shin and Kim made their debut with Kumho’s “Gifted People” concert and since then have been receiving awards at international events such as the Concours International Marguerite Long and Concours Reine Elisabeth.

Volodos has played with a variety of internationally renowned orchestras including the Berlin, Munich and New York Philharmonic Orchestras, among many others.

Metheny, the winner of 18 Grammy Awards, is one of the most critically acclaimed jazz musicians of the ’70s and ’80s and came to prominence as the leader of the Pat Metheny Group. His style combines progressive and contemporary jazz, Latin jazz, jazz fusion and more.

The band was originally the project of Zach Condon, who now leads a rotating group of members on tour.

Condon is a multi-instrumentalist who plays flugelhorn, ukulele, trumpet, mandolin, accordion and more.

Musically, the band’s influences range from Balkan-inspired melodies to French and American pop.

Jan. 30: The Joy of Strings celebrates its 15th anniversary with a New Year’s concert called “Dream of Dragon.”

Through the years, the group has performed at the Seoul Arts Center, Busan Cultural Center, Gyeonggi Arts Center and others, in addition to appearing on television shows such as EBS’s “Space Sympathy.”

Theater Seoul offers performances starring and presented for children. It has been presenting productions in English for 16 years.

In “Twelfth Night,” the lead character, Viola is shipwrecked in the coastal region of Illyria, where she is rescued by Lady Olivia. Viola goes to work for Olivia after disguising herself as a man, which makes for some very hilarious misunderstandings.

The play will be performed in English.

To Sunday: The adventurous tale of Zorro unfolds as a musical in this production performed by a full Korean cast.

The show features music by the Gipsy Kings and John Cameron and boasts a combination of acrobatics, dancing and dueling.

It is based on “Zorro,” the 2005 mock-biography of the masked swordsman by Isabel Allende, and opened in London in 2008.

To Jan. 29: Romeo and Juliet will be performed for children to help them understand the timeless Shakespeare play more easily.

The Seoul Metropolitan Theater has long been transforming Shakespeare into plays that both children and parents can enjoy. There are events every Wednesday and Thursday.

Jan. 27 to June 3: This musical based on Boris Pasternak’s 20th-century novel of the same title is performed for the first time in Korea.

Jan. 23 to 24: This event for the new year features performances, folk games and festive dishes. It takes place at Samcheonggak, a cultural site near the Blue House.

Saturday: The Seoul Electronic Music Festival is back in Korea for the second time, ready to heat up the capital in the middle of winter.

Headlining the show is renowned electro-funk duo Crystal Castles, whose music was made popular via the British TV series “Skins.” The duo’s album was also listed as one of NME magazine’s 50 Greatest Albums of the Decade.

British trance music group Above & Beyond will also perform. The group is currently ranked No. 5 in the world, according to the annual Top 100 DJs poll in DJ Magazine.

The rest of the lineup consists of popular local bands such as Idiotape, who have performed at two consecutive Global Gathering festivals.