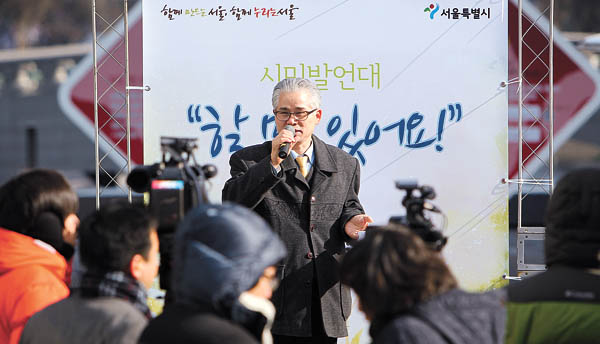 Park Min-su, 60, speaks yesterday at a public speaking platform at the Cheonggye Plaza in Seoul. The platform titled “I’ve Got Something to Say!” will be open to Seoul citizens from 11 a.m. until 3 p.m. on Wednesdays. By Kim Do-hoon


Despite the freezing weather, a few hearty citizens gathered at Cheonggye Plaza in central Seoul yesterday and passionately delivered their opinions on subjects regarding the economy, politics and social affairs.

At the open-air, public speaking platform, officially titled “I’ve Got Something to Say!” 65-year-old Kim Dong-hae, who was selected as the first speaker, said that the city government must provide more job opportunities for young Koreans who are in their 20s and 30s in order to improve the country’s economy.

According to the Seoul Metropolitan Government, it provided the stage yesterday in order to listen to citizens’ opinions about policies that the city government is running.

The city government said that the platform was inspired by the U.K.’s famous “Speakers’ Corner” in Hyde Park, London, which was created in order to strengthen communication with citizens, and it will consider valuable opinions suggested by citizens when the city makes its policies.

The event will be held every Wednesday from 11:00 a.m. to 3:00 p.m. at Cheonggye Plaza and each speaker gets 10 minutes. To participate, speakers must apply through the city government’s Web site (www.seoul.go.kr) and they will get their opportunity to speak in order of applications submitted.

In the application process, candidates must outline the subject of their speech and their basic identification information, but the speech won’t be censored. Speakers can’t slander anyone and are warned against supporting or denouncing any particular political parties. In the first week of the event, 16 speakers participated.

“I want to tell Mayor Park Won-soon why many young Seoul citizens have chosen him as the mayor,” Kim said during his speech. “The central government said that the country’s economy is being improved but our young people are having trouble earning money and getting jobs.”

A complaint was also made about civil servants’ bad attitudes toward citizens. Cho Yeon-sang, a 57-year-old businessman, said that he visited one of the district offices in Seoul, which he refused to disclose, asking simple questions regarding his business, but the office’s civil servants rebuffed him.

“The officials at the district office asked me why I’m trying to open up a business at my age and even asked me what college I graduated from,” Cho thundered. “I felt totally humiliated by the officials. Mayor Park has been saying that citizens are the owners of the city and our opinion is very important, but I think the mayor is the only one who thinks that way.”

After Cho, speakers brought more diverse subjects to the corner. Jeon Yeo-min, a radio program producer at Munwha Broadcasting Center stepped out and advertised his new radio show, and Park Min-soo, another elderly man came out and wished Mayor Park all the best in the next two years.

However, the initiative wasn’t successful in attracting an audience, with most of the citizens passing by the Cheonggye Plaza indifferently.

“I realized that there are not so many opportunities that allow elderly people to speak regarding social affairs,” Kim Hye-jeong, an official of the city government said. “I think the cold weather detracted from the audiences’ interest. We’ll try to advertise more about the event.”

Among the 16 speakers, 11 of them were older than 60 years old, according to the city government.