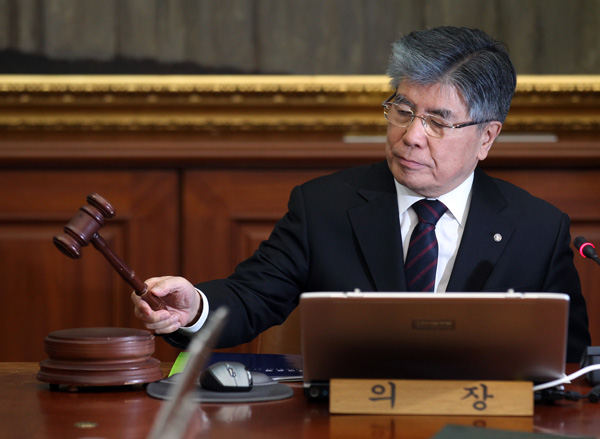 Bank of Korea Governor Kim Choong-soo bangs the gavel to announce the first meeting of the monetary committee this year at the bank’s headquarters yesterday morning. [YONHAP]


The Bank of Korea (BOK) kept its base rate on hold at 3.25 percent for the seventh month in a row yesterday, as rising inflation at home and uncertain economic conditions abroad left the central bank with few options.

Experts predicted the BOK will raise the key interest rate in the second half of the year in a bid to curb rapidly rising consumer prices after Europe and the U.S have had time to get to grips with the economic challenges they face.

“Going forward, the committee [...] judges that the downside risks to growth are becoming larger, due mostly to the European debt crisis and the continued possibility of slumps in major economies, as well as the unrest in international financial markets,” the bank said in a statement.

The decision, both unanimous and widely expected, stays in step with the decisions made by other central banks on the previous day. The European Central Bank held its benchmark rate at a record low of 1 percent after two straight reductions, while the Bank of England held its own base rate at 0.5 percent.

The BOK raised the base rate three times during the first half of 2011, each time by 0.25 percentage points, in order to stem rising prices, but has kept it frozen at 3.25 percent since July.

“Some economic indexes appear to be improving for the U.S., while the European economy seems to have put the brakes on [its downward descent],” said Bank of Korea Governor Kim Choong-soo. “However, that doesn’t change the fact that downside risks still outweigh positive signs.

“As for our view that the Korean economy has contracted, we predict the domestic economy will report lower growth during the fourth quarter [of 2011] than our previous forecast of 4 percent on-year expansion.”

The central bank has been engaged in a balancing act between the need to curb inflation and maintain economic stability in the face of an uncertain global economy.

“Similar to decisions to raise or lower the base rate, keeping it steady is also important considering our real economy’s exposure to external conditions, [and] stabilizing prices is the central bank’s primary concern,” said Kim.

Consumer prices reached on-year growth of 4.2 percent in December, exceeding the upper limit of the central bank’s target band of between 2 percent and 4 percent for two straight months after falling as low as 3.6 percent in October.

Many analysts expect inflationary pressure to fall to around 3 percent this year due to the continued slowdown of the domestic economy, as well as moves to lower raw material and food prices. Moreover, a number of global investment banks, including Goldman Sachs and HSBC, expect the BOK to raise the rate before the end of March.

“Though the central bank and many private think tanks predict that things will improve from last year, we cannot remain optimistic given the existence of inflationary conditions at home and abroad so far this year,” Minister of Strategy and Finance Bahk Jae-wan said yesterday.

Meanwhile, Kim said the central bank may raise banks’ cash reserve ratio to bring down prices by stemming excess liquidity, but that this method would need to be used in concert with changes to the key rate.

“Raising the cash reserve ratio would raise the call rate [inter-bank interest rate on funds], which would lead to a larger gap between [the call rate and] the base rate, and this would have to be closed with a base rate hike,” Kim said.

“Such methods cannot replace the key rate, which is at the core of [Korea’s] monetary policy.”

The cash reserve ratio is the ratio of liquid cash out of banks’ total deposit liabilities that banks are required to entrust to the central bank to ensure the safety of deposits.