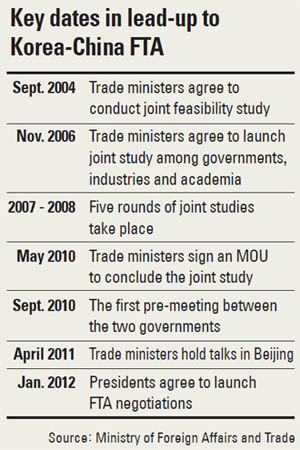 In September 2004, China first expressed interest in having a free trade agreement with Korea.

After more than seven years, and intentional foot-dragging by Seoul, some progress is finally being made.

Minister of Foreign Affairs and Trade Kim Sung-hwan said yesterday the government could launch formal talks with China on an agreement in the first half of the year after finishing domestic procedures.

Minister for Trade Bark Tae-ho, who took office on Dec. 31, joined the latest presidential visit to China. It is rare for a trade minister to participate in a president’s state visit.

“I held the first meeting with my Chinese counterpart Chen Deming,” Bark said at his first press conference yesterday. “We agreed on the need for an FTA between the two countries and promised to meet again to hold official meetings.”

Bark did not predict when the first negotiations could start.

He emphasized that a Korea-China FTA would be different from the FTA with the United States.

The government has been cautiously dragging its feet on the FTA with China due to an expected backlash from the agricultural industry. Geographical proximity is one of the advantages for doing trade with China, but it also means that fresh food products and produce can be imported from China, not only frozen items, and compete with local products.

It seems that major branches of the government started changing their views on the FTA around last July.

Minister of Strategy and Finance Bahk Jae-wan has led the change, saying “It’s time to have a clear stance on our side.” Following Bahk, Suh Kyu-yong, minister for food, agriculture, forestry and fisheries, said, “It is part of the current trend to push for an FTA with China.”

Cho Chang-sang, director of trade policy at the Ministry of Strategy and Finance, said, “The faster a Korea-China FTA takes effect, the better it is for Korea.” According to Cho, China has shifted its focus on becoming a highly industrialized country, which means that the economic and industrial gap between Korea and China will narrow rapidly. “The more time passes by, the less benefit Korea gets,” he said.

According to a high-ranking official, the Chinese government strongly wanted to start negotiating before the change of power in Korea in early 2013, so Seoul couldn’t delay any longer. In fact, the government unofficially had a plan to start FTA negotiations with China late last year but failed to do so because of the prolonged wrangling over ratification of the FTA with the United States and negative public opinion about the agreement. 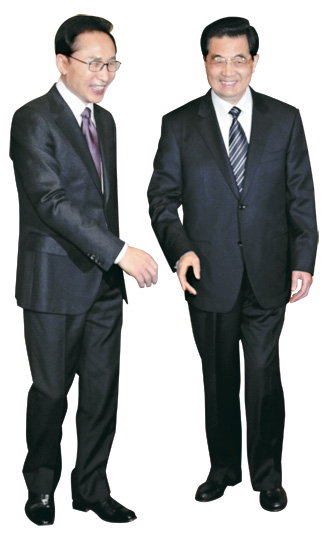 Worries about the impact on the agricultural sector from a China FTA seem destined to grow.

Domestic think tanks have released numerous reports saying the damage to the agricultural sector will be five times greater than under the Korea-U.S. agreement.

The Korea Institute of International Economic Policy forecast yesterday that a Korea-China FTA would cause agricultural and fisheries production to decline by 14.26 percent compared to 2005. The institute estimated that agricultural production value would decrease by around 20 percent in 2020 based on an assumption that tariffs on all kinds of agricultural products, except for rice, would be lifted during the 10 years after the FTA took effect.

Given that annual agricultural production stood at 16.8 trillion won ($14.5 billion) in 2005, the figure could drop by 3.36 trillion won at the maximum a year.

Meanwhile, the government’s estimation of damage by the Korea-U.S. FTA was a mere 815 billion won.

The Korea Rural Economic Institute also released a prediction that the agricultural sector will see a 2.77 trillion won loss if a Korea-China FTA reduces tariffs on agricultural products by 50 percent.

The institute projected that the loss will be three to five times bigger than the loss created by the FTA with the U.S. because China has an agricultural production system similar to that of Korea and raises almost the same products.

However, Deputy Trade Minister Choi Seok-young asserted that those forecasts are premature.

“It is inaccurate to make such forecasts before starting negotiations, and nobody knows what the Korea-China FTA will be like at the moment,” Choi said. “Those reports are misleading,” he added.