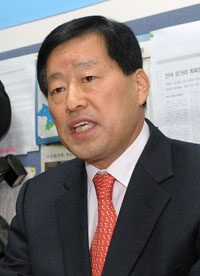 Prosecutors have obtained a list of names of ruling Grand National Party lawmakers and members, who are mostly close confidants of President Lee Myung-bak, and suspect the people on the list of receiving cash envelopes from National Assembly Speaker Park Hee-tae during the July 2008 party leadership election.

On the 18-page-list were the names of 38 GNP lawmakers and members based in Seoul and Busan, with their cellphone numbers and whether they would attend a meeting of Park’s election camp.

In a category dubbed “Attendance,” the names of 18 people were circled, including Koh Seung-deuk, the whistle-blowing lawmaker who made the bombshell accusation of the vote-buying attempt in the ruling party.

Koh told reporters Monday that Park had sent him an envelope stuffed with 3 million won ($2,590) on the eve of the chairmanship election, but he later returned it to Park’s aide Goh Myeong-jin.

Most of the circled people are from a pro-Lee faction. And those without circles or whose names were crossed out were confidants of former Grand National Party Chairwoman Park Geun-hye or aides to then-election rival Chung Mong-joon.

Prosecutors yesterday questioned An Byun-yong, a 54-year-old GNP member who was the funding manager at Park’s election camp in Seoul in 2008. They suspect that he gave a total of 20 million won to five GNP camp managers in Seoul and ordered them to distribute 500,000 won each to 30 other GNP members in order to buy votes for Park. An’s name was also on the list, prosecutors said.

Four of the five election camp managers told prosecutors at a questioning on Tuesday that An handed out the money and the list of names to the managers at an office in the downstairs of the campaign office in Yeouido.

However, prosecutors are still figuring out if the listed people indeed received cash envelopes from An, or if they were involved in the process of giving money to other people.

Prosecutors launched a probe into the bank accounts of attendees at Park’s election camp to figure out whether the money that An allegedly gave to the managers came from the same source as Koh’s 3 million won that was received from an unidentified delivery man.

An was a close confidant of Lee Jae-oh, a powerful politician close to President Lee. He was also among three core members of Park’s campaign office during the July 2008 election, along with Kim Hyo-jae, current senior Blue House secretary for political affairs, and Jo Jeong-man, senior policy secretary to National Assembly Speaker Park. Kim and Jo will soon be summoned for questioning, according to the prosecution.

Tensions are rising in the ruling party because a slew of its members whose names are on the list will likely be summoned. This comes in the midst of an internal rift and the lame-duck Lee administration, which will end in 2012.

The listed people all denied the allegation in interviews with local media. An also convened a press conference after the questioning yesterday and said that the allegation is “a plot set up with political purposes.”

“I didn’t give or receive money at all,” An said. “Everything was set up, different from the truth, and there’s a plot by some powers to achieve their purpose, using me as a scapegoat.”

“Pushing me [as a suspect] and reiterating the fact that I am ‘a close confidant of Lee Jae-oh’ is seemingly a prelude to politically kill Lee Jae-oh by some specific powers,” he added.

Asked if Park saw the list, An said, “he has never seen the list and he was not in a position to order something at the time.”

Goh and An grew up in Gyeongsan, North Gyeongsang. An said that “Some say that I am a close hometown friend with Goh, but I don’t know him well.”

The parliamentary speaker is currently on a business trip abroad and didn’t change his flight schedule to come to Korea earlier.