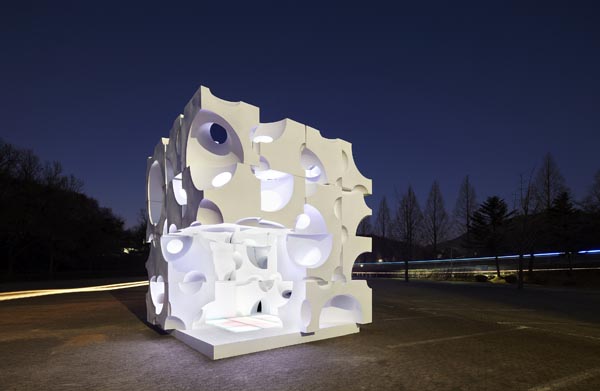 “Cubrick,” by architect Kim Chan-joong, is on display at Seoul Grand Park in Gwacheon, Gyeonggi, as part of a public art project by the National Museum of Contemporary Art. By Kim Yong-kwan

Seoul Grand Park has a new sculpture in its plaza - a giant, white cube that looks like several pieces of Swiss cheese stacked together.

The cube is a new piece of art set up by architect Kim Chan-joong as part of the public art project “Art Folly” by the National Museum of Contemporary Art, which is adjacent to the theme park in Gwacheon, Gyeonggi.

People can enter the piece, called “Cubrick,” and see the park from various angles.

According to the museum, the work was created by stacking 42 cubes, each of which is one-meter wide, one-meter long and one-meter high and is made of fiber-reinforced plastic. The artist made six kinds of modules by cutting the sides of each cube in different ways.

“The open windows generated by the gaps between the stacked modules have different shapes from each other, so they capture various views of the surrounding area,” the museum said in a press release.

“It is very different to see the sky or trees through small windows or cracks than it is to see them directly,” said Kim, who is currently serving as a professor in the architecture department at Kyung Hee University. “With ‘Cubrick,’ I want people to discover new aspects of natural scenery.”

The floor of the sculpture contains LED displays of images and text with information about art exhibits and events in the museum. “Cubrick” will be displayed through June.

This is the first project planned by the MOCA and Seoul Grand Park, and it aims to maximize the uniqueness of the venue, the museum said. It also said it will launch a second “Art Folly” project this summer in the museum’s outdoor sculpture park and courtyard.