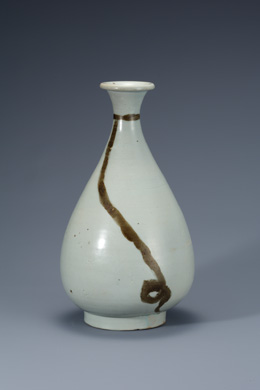 This bottle showcases the typical solidity and curvaceousness of white porcelain from the early Joseon period.

The rope, which twines around the narrow neck and drapes downward before a final curl, was painted in iron-brown glaze.

The simple yet composed portrayal of blank space counterimposed against a strong line, drawn without hesitation, reveals an artisan working at the peak of his talent, transcending mere craftsmanship and pointing toward a higher level of fine art.

Inside on the bottle’s base, some Korean characters were stroked in the same glaze. Though their meaning cannot be deciphered, it can be presumed that this bottle was crafted after the invention of Hangul in 1443.