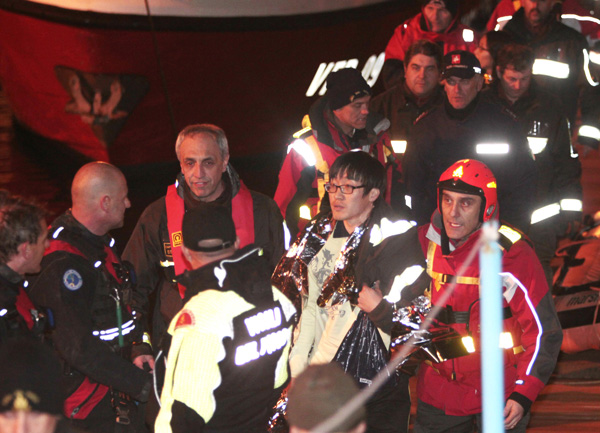 A honeymooner from South Korea, right, walks with Italian firefighters after he and his wife were rescued from the luxury cruise ship Costa Concordia, which ran aground off the Tuscan island of Giglio, Italy. [AP/YONHAP]

A honeymooning South Korean couple was trapped in their cabin on the luxury cruise liner that ran aground off Tuscany for 24 hours before finally being rescued, Italy’s Coast Guard said yesterday.

The South Korean Embassy in Rome said that a total of 23 South Koreans including the honeymooners were rescued unhurt from the Costa Concordia. But the embassy was still investigating whether any more Korean passengers were on board.

The 114,500-ton ship carrying around 3,200 passengers and 1,000 crew members apparently hit a reef in shallow waters off the Tuscan island of Giglio at around 10:30 p.m., when dinner was being served. The cruise ship tilted and eventually half-sunk on its side with a 50-meter (160-foot) gash in its hull, killing at least three people and leaving 50 missing and 20 injured up until yesterday.

According to Italian authorities, local rescuers banged on doors of the cabins that weren’t submerged and early Sunday heard a reply from one of the rooms. The South Korean couple, who appeared to be in their late 20s, were on their honeymoon and looked healthy when found. 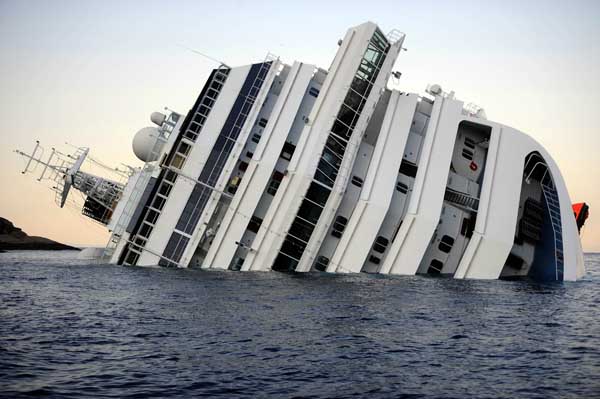 The ship, owned by the U.S.-based cruise giant Carnival, departed from the northwestern Italian city of Savona early Friday bound for Marseille, France, via Barcelona, Spain. The 290-meter liner had five restaurants and four swimming pools.

The vessel’s passengers included 989 Italians, 569 Germans, 462 French and nationals from more than 50 countries, including Japan, Brazil and Australia, according to the ship’s managers. Two French and one Peruvian were found dead so far.

“Have you seen ‘Titanic?’ That’s exactly what it was,’’ said Valerie Ananias, 31, a schoolteacher from Los Angeles who was traveling with her sister and parents, according to the Associated Press.

“Then we heard a bang and a roar and the cutlery fell to the ground,” Luciana Castro, a journalist, told Ansa, a news agency in Italy.

“We were crawling up a hallway in the dark with only the light from the life vest flashing,’’ her mother, Georgia Ananias, 61, told the Associated Press. “We could hear plates and dishes crashing, people slamming against walls.”

After the ship started to list on its side, passengers were ordered to get into lifeboats, but some people jumped into the Mediterranean Sea. Some 50 passengers who were stuck on the ship were rescued later by helicopters.

Questions still remain about why the ship sailed close to the shore and whether the captain and crew abandoned the stricken ship.