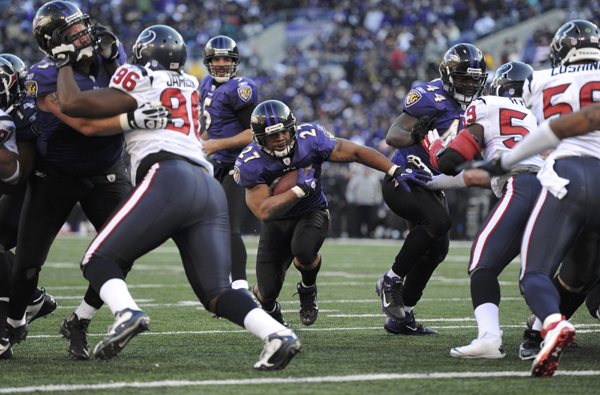 Baltimore Ravens running back Ray Rice, center, runs through a hole in the line against the Houston Texans in the third quarter of their NFL AFC Divisional Playoff football game in Baltimore, Sunday. The Ravens won 20-13. [REUTERS/YONHAP]

WASHINGTON - Eli Manning threw for a career playoff high 330 yards and three touchdowns to power the New York Giants to a 37-20 upset of reigning Super Bowl champion Green Bay in an NFL playoff shocker on Sunday.

Hakeem Nicks caught seven passes for 165 yards and two touchdowns and Giants defenders forced four turnovers as the Packers, which went an NFL-best 15-1 this season and averaged 35 points a game, were ousted in sub-zero temperatures.

“It shows our hard work and determination,” Nicks said. “We’re peaking right when we need to. We’re stronger than we have been all season. We just want it.”

As a result, New York avenged a regular-season home loss to the Packers and joined the Baltimore Ravens in advancing to next Sunday’s playoff showdowns that will decide the berths in Super Bowl XLVI at Indianapolis on Feb. 5.

“We can go as far as we want to go,” Nicks said. “We’ve got a bunch of guys who believe, and we can do anything if we believe.”

“I think we’re a dangerous team,” Giants coach Tom Coughlin said. “There are always things for us to improve upon but I like where we are.”

Baltimore’s Joe Flacco threw two touchdown passes to lead the Ravens, who know the challenge they face after seeing the Patriots rout Denver 45-10 on Saturday.

“What they did to the Broncos, they sent a message to whoever was coming up there,” Ravens linebacker Ray Lewis said. “We have to be ready for them.”

The Giants, who needed a regular season-ending victory over Dallas to take the last vacant playoff berth, started slow but are one win shy of their first Super Bowl since beating New England in 2008.

“We started to believe and trust in each other and our defensive people got together and decided they were better than they’d been playing,” Coughlin said.

“They had success and success breeds confidence.”

Manning, who completed 21 of 33 passes, tossed a 37-yard touchdown pass to a high-leaping Nicks on the last play of the second quarter to give New York a 20-10 lead, the first time Green Bay trailed at halftime at home this season.

“I just jumped up and got it,” said Nicks, who fought off two defenders. “It was just me and the ball in my mind.”

The Packers, who had a first-round bye, became the winningest team ever to drop its playoff opener.

“We did not play to our identity,” Packers coach Mike McCarthy said. “The biggest thing was self-inflicted wounds, dropped balls. We left some yards on the field.

“We did not do a very good job handling the football. No excuses. We practiced well. There was nothing in preparation that led me to believe this was going to occur.”

At Baltimore, Lewis made a team-high seven tackles and the Ravens forced four turnovers to set up 17 points and spoil the first playoff trip in the Texans’ 10-year history.

“When we got up 17-3 the No. 1 thing I told everybody was they were going to make a rally. At the end of the game, we made the plays that counted,” Lewis said.