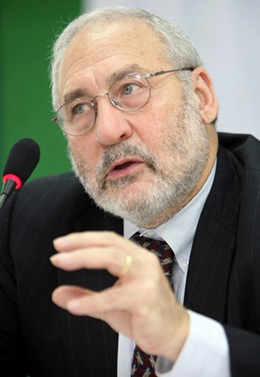 HONG KONG - Joseph Stiglitz, Nobel Prize laureate and professor of economics at Columbia University, advised Korea to better diagnose why there is growing income inequality in its society.

“[Korea] needs to diagnose particular sources of inequality and then try to figure out why the markets aren’t working well to create jobs,” Stiglitz said at the fifth Asian Financial Forum in Hong Kong yesterday.

Stiglitz, who is credited with coining the notion of “the 1 percent versus 99 percent” that has been embraced by the so-called Occupy movements around the world, said globalization has contributed to the spread of protests in 2011.

With regard to the “Occupy Yeouido” protests late last year, Stiglitz said Korea needs to study its economy and the sources of the income inequalities.

“Sources of economy are slightly different in each country because economic circumstances are different, so my view is look at the sources of poverty at the bottom [part of the Korean economy] and the sources of the wealth at the top, or monopoly power, or the government,” Stiglitz said. “There is no single policy to solve the problem. [Korea] will need a comprehensive policy.”

Stiglitz gave an example from the United States. He said the U.S. government gave drug companies a kind of gift amounting to one third of the gross domestic product when they created Medicare, the health insurance system for older Americans. He believes that created distortions in the market and inequalities.

“So you need to diagnose particular sources of inequality [in Korea] and then try to figure out why the markets aren’t working well to create jobs,” he said.

He also pointed out that innovation in the West has been focused on saving on labor at the expense of jobs.

“So you have these fantastic inventions, like checkouts at grocery stores and drug stores where you don’t need any people anymore,” he said. “But these are well-paid workers that are being replaced by machines, partly because they cost capital, creating unemployment.”

Stiglitz said the global protest movement in 2011 was triggered by growing inequalities between the top 1 percent of country’s populations and the remaining 99 percent, and political systems that don’t address the inequalities.

The top 1 percent phenomenon, he said, was “not only inevitable but also not productive.”

“Fragmented global markets distort economic resources and create a spaghetti bowl of complexity with rules of origin,” he said. “In general, the appropriate form of trade is multilateral, not bilateral.”

Stiglitz argued that bilateral trade agreements tend to be “unbalanced.” He said the negotiating power of the U.S. and the EU over smaller countries is unbalanced, calling it “typically more unfair.” He cited Korea’s FTA with the U.S. as one example, deeming Korea weaker than the U.S.