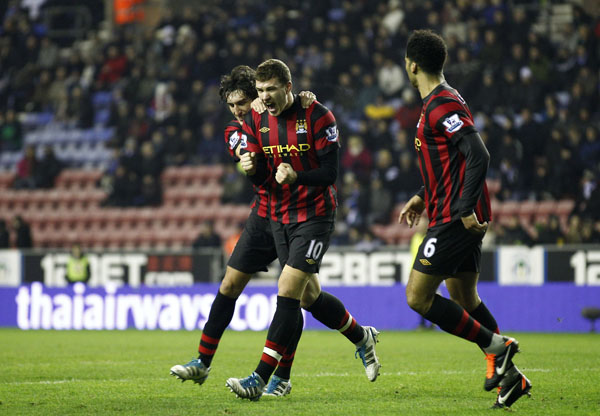 Manchester City’s Edin Dzeko, center, is congratulated by teammates after scoring against Wigan Athletic during their English Premier League football match at the DW Stadium in Wigan, England, on Monday. City won 1-0. [AP/YONHAP]


WIGAN, England - Manchester City’s two-month wait for an away win in the Premier League ended on Monday, with Edin Dzeko’s goal settling a hard-fought 1-0 victory for the leaders at Wigan.

The Bosnia striker brought an 11-match goal drought to an end in the first half, heading David Silva’s free kick into the net.

“He deserved to score a goal,’’ City manager Roberto Mancini said. “He scored this very important goal for us and I hope he continues it in the next game.’’

Dzeko had not scored since a Nov. 5 win at Queens Park Rangers, City’s last away win in the league before four successive setbacks.

“We needed that win,’’ City goalkeeper Joe Hart said. “It wasn’t pretty, and it wasn’t a pretty pitch out there. Fair play to Wigan, I think they are in a false position in the league at the moment for me so it’s a great result for us.

“We’ve not been great on the road recently so we’re really happy.’’

The match ended with City manager Roberto Mancini in animated conversation with the fourth official after referee Martin Atkinson only showed Wigan’s Maynor Figueroa a yellow card for handing the ball as he denied Aguero a clear run on goal in the 88th minute.

“Was manchini [sic] asking for red card????,’’ Manchester United striker Wayne Rooney wrote on Twitter, a week after being accused by Mancini of helping to get City captain Vincent Kompany sent off in their derby.

City, though, ended the weekend fixture program still three points clear of Manchester United and a further two ahead of Sunday’s opponent, Tottenham, as it seeks a first English title since 1968.

The Wigan match marked Silva’s return from injury and there was more reliance on the Spain midfielder than usual with Yaya Toure among the five senior figures missing and Samir Nasri struggling for top form.

Silva was behind much of the most inventive play, having a couple of shots blocked, almost sending Aguero through and supplying the free kick for Dzeko’s goal.

Wigan failed to get close enough to Dzeko and as Gary Caldwell and Antolin Alcaraz floundered, Dzeko found the bottom corner with a precise header in the 22nd minute.

“It was a really, really soft one [to concede],’’ Wigan manager Roberto Martinez said.

As the opening period drew to a close, Aguero brought a fine one-handed save out of goalkeeper Ali al-Habsi.

Despite the closeness of the scoreline, it appeared City would stroll to victory in the second half, but Wigan remained a spirited opposition.

With plenty of teammates in support, James McArthur could have picked a better option than a long-range shot from an acute angle that fizzed wide rather than equalizing.

It was not long before City was back on the offensive but it somehow failed to increase its advantage by the hour mark.

First, al-Habsi made a fine double save to deny Dzeko and Silva, clawing an initial curling effort away from the top corner and then repelling a low shot from seven meters.