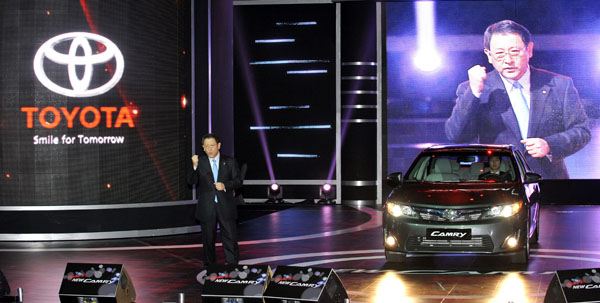 The much-heralded visit to Korea by Toyota CEO Akio Toyoda yesterday was aimed at showing how the company has rebounded from the devastating effects of last year’s earthquake and a massive recall in 2010 as the carmaker launches its new Camry here.

Toyoda, president and CEO of Toyota Motor Corp., made his first trip to the country in seven months as a show of confidence, and thanks, after a period of prolonged turbulence to shore up confidence in the brand and promote the long-running vehicle, now in its seventh generation.

“When the earthquake hit Japan, Korea was the first to offer a helping hand,” Toyoda said at a press meeting in eastern Seoul to commemorate the launch.

“There was a time when we weren’t able to produce enough cars, even though we wanted to,” he added.

It is unusual for the CEO of an automaker to appear at a car launch overseas. When Toyoda last visited in 2011, he made trips to local dealerships to encourage them as they struggled with falling sales due to the shortage of vehicles resulting from the March earthquake.

Such efforts seem to have been ramped up for the Camry, Toyota’s flagship sedan, which has ranked as one of the most important cars in its lineup since its debut in 1983. In two decades it has sold over 14 million units worldwide.

“The Camry is a key model and it was the ninth bestselling imported car in Korea last year,” said Hisao Nakabayashi, president of Toyota Motor Korea. “With the launch of the seventh-generation model, Toyota’s sales are expected to drastically improve.”

Nakabayashi named Hyundai’s Grandeur and Honda’s midsize Accord as its chief rivals.

Toyota has an ambitious goal for the new Camry, hoping to shift three times as many in Korea as it did of the previous model last year, or 6,000 compared to 2,020.

Testament to how high Toyoda is setting the bar is the fact that only two foreign brands beat this target in 2011: Mercedes-Benz with its E300 and BMW with its 520d.

The new Camry is competitively priced, with the gasoline version going for 33.9 million won ($29,700) - 1 million won cheaper than its predecessor - and the hybrid retailing for 42.9 million won. It is expected to directly compete with Hyundai’s Grandeur, a full-size sedan that comes with a price tag of between 31.2 million won and 44.5 million won.

The Camry is produced in George Town, Kentucky, rather than in Japan, as the company intends to overcome the profit-eating impact of the high yen and take advantage of the Korea-U.S. free trade agreement that is due to take effect early this year.