The bar has gotten a lot higher this year

The bar has gotten a lot higher this year 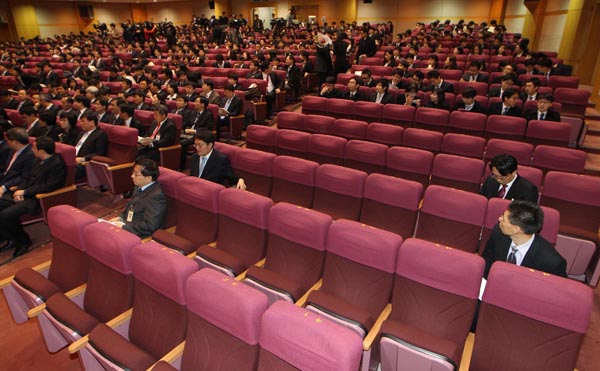 There were a lot of empty seats at the graduation ceremony of the 41st class of the Judicial Research and Training Institute in Ilsan, Gyeonggi, yesterday. Members of the class who have yet to line up jobs - around 40 percent of the class - decided to boycott.

According to the institute, of the 1,030 who completed the two years of mandatory training after passing the bar exam - excluding 176 who went for military duty - only 349 have found jobs as judges, prosecutors, in the government or in private law firms. In 2008, 64 percent of institute graduates found employment, which declined slightly over the years but still held at 56.1 percent last year.

Until the implementation of the new three-year law school system in Korea in 2009, people who wanted to enter the legal profession had to pass the bar and then do two years of training at the institute, established in 1971 by the Supreme Court.

This year’s class faces competition from the first graduating classes of the new three-year law schools. By Choi Seung-shik