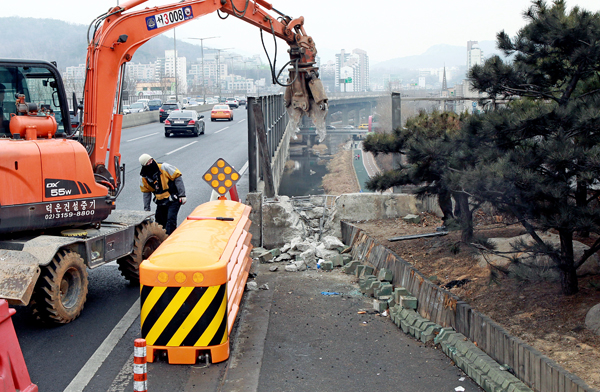 Construction workers repair damages on the Naebu Expressway yesterday after a car drove off the on ramp and crashed 25 meters (82 feet) below. A series of accidents have occurred on this overpass.By Kang Jung-hyun

The third car-related fatality in less than two months occurred on Seoul’s Naebu Expressway yesterday, once again putting into question whether there is a fundamental structural flaw in the road.

A driver on the 22-kilometer (13 mile) Nambu Expressway was heading towards Jeongneung, Seongbuk District from Seongsan, Mapo District when the car veered off the Yeonhui on-ramp, which leads to the overpass, and crashed 25 meters below.

The vehicle crashed into the bank of the Hongje Stream, bursting into flames, and its driver, a 41-year-old surnamed Kim, whose body was ejected from the vehicle on impact, died on the spot.

According to the police, Kim’s vehicle’s right tire hit a short stone wall lining a flower bed alongside the road as the car reached the end of the ramp. The car’s tire rode up the wall and the car broke through part of the concrete guard rail and sailed off the road.

“The car was lifted up as its right wheel rode up the wall,” one policeman stated.

The other two accidents also occurred as cars reached the end of a ramp leading onto the expressway as its right tire skidded on the stone flower bed wall, lifting up the vehicle and causing it to fly off the road.

On Nov. 28, a 1.2 ton truck swerved off the ramp, followed by a similar accident two days later, when a one-ton refrigerated truck also slipped off the road after its wheel skidded off the flower bed wall and the vehicle crashed into the stream below. Both drivers were killed.

Frequent drivers of the road pointed out flaws in the way the ramp connects to the expressway and many drivers mistake the ramp to be leading straight when the road actually curves. Thus, those who mistake the curve can end up hitting the flower bed wall and flying off the ramp. Furthermore, there are no speed control cameras installed at this location.

On Dec. 2, the Seoul Metropolitan Government called the police and experts for an emergency inspection of the location to figure out the cause of the accidents. But even as of the accident yesterday, the Seoul city government has not yet installed a protective wall or taken any preventative measures.

Meanwhile, one city official stated, “We are inspecting all the roads instead of just the Naebu Expressway, so it’s taking longer to come up with a countermeasure than expected.” They have proposed building a higher concrete wall for the moment around the flower bed. Meanwhile, the police is investigating if the city government has been lax in maintenance.