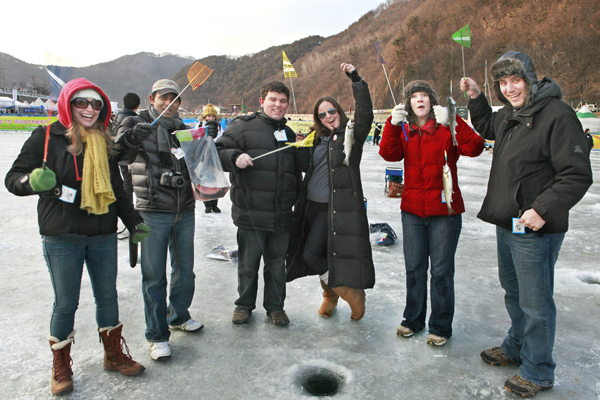 A group of visitors in the fishing area designated for foreigners show their catch on Saturday during the ninth annual Hwacheon Sancheono Ice Festival in Gangwon. They plan to grill the fresh sancheoneo at the barbecue station right next to the river with a dash of salt and butter to celebrate their day’s labor. By Park Sang-moon

Hundreds crouched over holes in the frozen Hwacheon River in Gangwon, luring the sinuous, silvery trout hidden under 30 centimeters of ice.

Some amateur anglers - plastic fishing rods in hand while seated on little foldable stools - were ready to battle all day with the sancheoneo, a species of trout that dwells in cold, unpolluted water, touted as the “Queen of the Valley.” Others gave up and hopped on wooden sleds, sliding down nearby icy hills and enjoying the many other winter attractions.

For the month of January, the sparsely populated county of Hwacheon, Gangwon, is bustling with people flocking to this remote area for the Sancheono Ice Festival, Korea’s foremost winter festival. Some 10 percent of the visitors are from abroad, traveling to the peninsula for this 23-day event, which kicked off on Jan. 7.

The festival attracts over one million visitors each year to enjoy ice fishing and many other winter activities. It has been in the international spotlight since CNN’s Web site listed the festival as one of the “seven wonders of winter,” joining the Northern Lights in Canada and Yellowstone National Park’s boiling geysers in the United States.

As of Monday morning, there have been a total of 884,630 people who have attended the festival, of which 8,759 were tourists from abroad, according to the festival organizers.

Just nine days into the festival, this tally already beats the 2010 record of 6,862 foreign visitors out of a total of 1.33 million. Over 4,000 visitors from overseas attended the festival last weekend alone - and many more are expected for the Lunar New Year holiday this weekend.

Hwacheon’s population is 24,000 while the number of soldiers stationed in the county is 36,000. With the support of the Ministry of Culture, Sports and Tourism, Gangwon and regional military units came up with the winter festival to revitalize the lackluster local economy in 2003. And so far, the plan has been a success.

When the ice festival was canceled last year due to a widespread outbreak of foot-and-mouth disease, the local economy incurred a 50 billion won ($44 million) loss.

One visitor, 45-year-old Xavier Liaudet, pointed to a group of young anglers nearby who popped fish after fish out of their hole and stated joking in Korean, “They’re all thieves. I haven’t caught any because they keep taking my sancheoneo!”

The Chinese characters of the name of the fish literally translate to san (mountain), cheon (river) eo (fish). For the festival, millions of sancheoneo are farmed in nearby rivers and then deposited several times a day into the frozen river for the tens of thousands of anglers that fish and devour them each day. 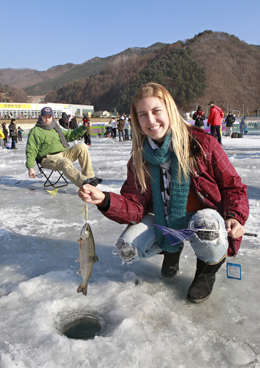 An amateur angler from the United States, currently teaching English in Korea and visiting the Sancheoneo Ice Festival with a group of friends, snags a fish from an ice hole in the frozen Hwacheon River.

Liaudet, a French professor at ChungAng University, brought his entire family, including his parents who are visiting from France for the month, to the ice festival for the weekend.

But the family, including his mother who was supported by a cane, was too busy to talk as they wagged their gyeonjidae, a short fishing rod with a metal hook attached to the end of the line, up and down over a hole in the ice.

Another group of 30 successful fishermen crowded the barbecue stand next to the river where they grilled their catch immediately to savor the steaming, flaky morsels. Others walked down to the next station to slice the fish up into fresh sashimi, dipped in spicy red pepper sauce.

When grilled, sancheoneo is almost odorless. The general consensus at the barbecue stand was, “It’s tasty - it doesn’t smell fishy at all.”

“Just for the foreign visitors, we add some salt mixed with our secret ingredient - curry powder - and then slather the fish with butter before wrapping it in aluminum foil and grilling it,” a fishmonger at the barbecue stand said.

Alana Brooks, 24, an English teacher at a hagwon in Chuncheon, Gangwon, who is originally from New York, adroitly wove in and out of the crowd, back at the festival for her second weekend, this time with a new set of friends. “I wanted to come to the festival last year, but it was closed down. So far, I’ve tried ice fishing and sledding, and now I want to see the snow sculptures,” she said. “There were a lot of people last week, but there seems to be even more this week.”

Around 90 ambassadors, deputies and their families from some 40 embassies in Seoul were not about to miss out on the winter festivities. A group of diplomats were invited to tour Hwacheon and attend the festival.

“I think eating trout is much easier than catching them,” Polish Ambassador Krzysztof Majka said. It was his first time ice fishing, but his wife, Zofia, was bent on her knees, lowering the line expertly even though all that could be seen through the ice hole was pitch blackness. 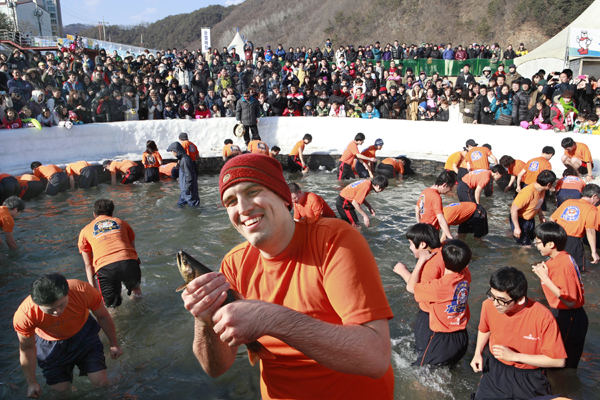 Some of the diplomats’ younger children showed long faces when they couldn’t catch a fish before the festival closed down at six.

Ambassador of Guatemala Rafael Salazar, on his first visit to Hwacheon, was swaddled in many layers of winter clothes. “Korea is still cold for me,” he said. “We come from a tropical country. It’s very interesting to get to know about the winter, especially since we haven’t seen ice festivals before. I look forward to ice fishing.”

The ambassador conceded, however, that he was not up for dunking his body into the icy cold waters to have a try at bare-hand fishing.

Catching trout with bare hands is seen by many as the highlight of the festival, and throughout the day thousands of spectators gather around two pools carved out of ice, including one smaller area for children.

Those brave enough to face the icy waters - around 6 degrees Celsius (42 degrees Fahrenheit) - stripped down to just T-shirts and shorts provided at a changing room before hopping into the freezing water.

Reactions to what happens next differ between foreigners and Koreans, one supervisor said.

“The difference between foreigners and Koreans is that foreigners seem to really enjoy the process even if they don’t catch any fish while Koreans are determined to catch as many fish as they can since they paid an admittance fee.”

Some people collect the trout in their clothes to carry out more. Each person is limited to catching three fish and time in the pool is limited to five minutes. Staying in the frigid waters for longer can be dangerous.

Govindarajalu Padmanbhan, a 36-year-old Samsung Engineering employee from India, has been in Seoul for the past five months. “It was very slippery and cold, but I caught three with my hands,” he said triumphantly, holding up his bag of fish.

Bare-handed usually runs four times a day on a first-come-first-serve basis, but during the weekend, when it’s especially busy, extra slots are added.

Three English teachers who came all the way from Daegu were turned away when they missed the last registration cut off at 4 p.m. “Oh well, we’ll have to come back tomorrow,” said 25-year-old Nikki Muyskens from Colorado, who teaches English in a public elementary school through the Fulbright English Teaching Assistantship Program.

Besides fishing, there are many other winter activities that can be enjoyed at the festival including ice and snow sledding, ice skating, ice hockey and snow football, along with a snowmen plaza and even a sled-making contest. Zip-lining is a popular new addition this year - zip liners pass over the 66,115-square-meter (16.3-acre) festival area.

But despite the festival’s efforts to expand and appease travelers from all over Korea and the world, accommodating the influx of tourists has proven to be a difficult task for organizers.

One supervisor at the foreigner’s fishing station said the opening and closing of the festival each day does not offer adequate fishing time for visitors.

“The trip should have been organized so that they could come fishing earlier,” he said. “The sun starts to set at around 5 p.m., and when it gets dark, it’s difficult to catch any fish.”

One family of four from Jeju was turned away at 10 a.m. on Saturday from the ice-fishing area for the general public because all 6,000 slots were already full.

A staff member at the fishing area said that at 2 p.m. another 700 anglers were granted admittance. “Everybody has different luck when it comes to fishing, and some people come and stay for the entire day.”

Reserving a spot is recommended, especially for those traveling from afar, as 6,000 ice openings are available for reservation online every day.

“The festival is really great for foreigners - we have all this space to fish - but it’s not really fair for the Koreans,” said Liaudet, the French professor, who was still fishing an hour later. “Some of them came a long way and were not able to fish.”

Compared to an admission fee of 12,000 won for Korean adults, the admission fee for adult foreigners to ice fish is 10,000 won, and 10,000 won is kicked back as a Hwacheon gift certificate that can be used anywhere in the county.

The discount won’t make much of a dent, however, as surrounding accommodations can be expensive for a remote county.

“The food is too pricey around here. Last night we spent 100,000 won to eat at a pojangmacha [street vendor]!” Liaudet said. “And it costs over 100,000 won to rent a room in someone’s house. Inns and motels around here all are booked.”

Carolanne Cuddihy, a 26-year-old New Yorker visiting with a group of five friends from Seoul, said, “We don’t know where we’re going to stay tonight. Last night, we were able to stay at a motel in the town, but it’s booked for the weekend.”