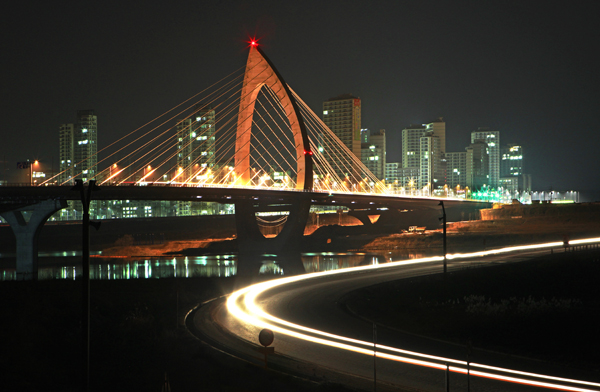 Lights illuminate a bridge in front of a new apartment complex in Sejong City last week. Politicians are wrangling over whether Sejong City should be designated a new National Assembly constituency. By Park Sang-moon


When the National Assembly defeated President Lee Myung-bak’s attempt to scrap the construction of a mini-capital city in South Chungcheong in 2010, it seemed that eight years of political wrangling over the Sejong City project was over.

Fat chance: politicians are wrangling once more over whether Sejong City should be designated a new National Assembly constituency, and some big political names want to grab that seat if it’s created. 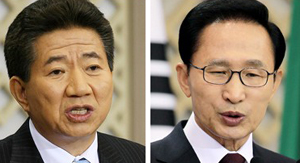 And the decision is going right down to the wire. The deadline for redrawing the political map of the province in advance of the April 11 general election is early next month. As of this week, it was entirely up in the air whether proponents or opponents would win out. The building of a new mini-capital for Korea in Sejong City will have countless repercussions, from the workings of the government to land prices in Seoul and South Chungcheong. But from the very start, the plan has been a very big political football.

The idea was first floated by Roh Moo-hyun in September 2002 as a presidential campaign pledge. His idea was to decongest Seoul by moving the country’s capital to the Chungcheong region. The flip side was that economic development would be brought to a region that had fallen behind. Liberal candidate Roh also wanted to attract votes from the Chungcheong provinces, known as a swing region compared to the conservative and liberal regions.

It worked. Chungcheong voted for Roh and he won the 2002 presidential election. His administration presented a bill to build a new administrative capital city in South Chungcheong, which was approved by the legislature in December 2003. But the conservative Grand National Party, then in the opposition, brought the plan to court saying it was unconstitutional. The Constitutional Court ruled in October 2004 that the nation’s capital must remain in Seoul.

In an adroit move, the Roh administration revised the plan to relocate many but not all government offices to Sejong City, which was termed an administrative city, not a new capital. The President’s Office, National Assembly, the Constitutional and Supreme courts and several top ministries would remain in Seoul, the formal capital of the country. The new plan won legislative approval in March 2005. Another challenge was filed to the Constitutional Court, but in November 2005 the court denied it.

After being elected president in 2007, Lee said he wanted to keep government workers in Seoul, but continue with the development plans for South Chungcheong by making Sejong City an industrial, science and education hub.

Opposition parties opposed the revision to the plan, as did Grand Nationals loyal to Lee’s political rival Park Geun-hye. After the GNP suffered a defeat in the mid-2010 local elections, in which Sejong City was a big issue, Lee finally threw in the towel and asked the National Assembly to decide. On June 29, 2010, the National Assembly killed Lee’s plan.

The exodus of 10,452 government officials and 36 government offices, including nine ministries, starts in September with the relocation of the Prime Minister’s Office. With 80 days left before the April 11 legislative elections, the ruling and opposition parties have failed to redraw any constituencies reflecting the new population projections. While a draft was submitted to the Special Committee on Political Reform last November, the lawmakers on the committee have yet to reach a compromise.

The new constituency map must be completed by Feb. 11 to create voters lists for absentee voting.

According to the November draft, the National Assembly had no intention to designate Sejong City as a parliamentary constituency. This has not pleased current residents. On April 11, Sejong City will have its first mayoral and education office head elections and the city will become a metropolitan autonomous government.

“If the current constituency map stays, we will cast ballots as Cheongwon County voters in the general election, while voting as Sejong City residents in local elections,” said a resident of the Cheongwon County, North Chungcheong.

Sejong City will cover the entire Yeonggi County of South Chungcheong, three towns in the nearby city of Gongju and eight small villages of Cheongwon County in North Chungcheong. Although it occupies 465.23 square kilometers (179.62 square miles), the city’s population is not currently enough to have its own lawmaker. As of now, a constituency must have a minimum population of 103,394. As of late October, Sejong City had a population of only 96,000.

About 100 Cheongwon County residents gathered on Nov. 22, 2011, to demand the city be designated a National Assembly electoral district. “It is wrong to simply use the current population and say we should vote for a lawmaker representing a nearby city, not Sejong City,” a protester said.

Unless the National Assembly decides to designate the city an independent constituency, voters from Yeongi and Gongju will vote for a lawmaker to represent the region, while Cheongwon County voters will cast ballots in a different electoral district in Cheongwon.

The Liberty Forward Party, a Chungcheong-based conservative opposition group, demanded the National Assembly’s Special Committee on Political Reform make a decision as soon as possible. It wants Sejong City to become a constituency and have its own lawmaker.

According to sources at the legislature, both ruling and opposition parties agreed that Sejong City should become a new constituency, but the final approval has yet to come.

If Sejong City gets a seat in the assembly, some political heavyweights have already expressed interest in filling it, or hinted at it. The city is destined to be important as the home to key government offices. Possible candidates include Liberty Forward Party Chairman Sim Dae-pyung, a two-term lawmaker; Chung Jin-suk, a former political affairs senior secretary to President Lee; and Lee Hae-chan, former prime minister during the Roh administration.