No end in sight for apartment sale drought

No end in sight for apartment sale drought 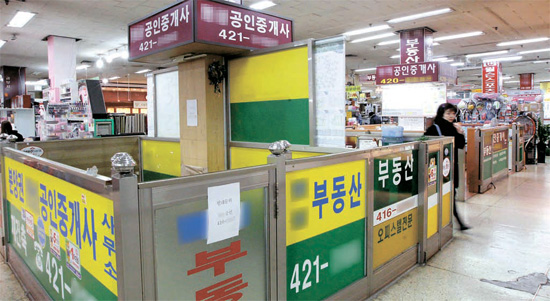 Korean estate agents have rarely had it so hard.

Last week, a store in Jamsil, southeastern Seoul, that houses scores of real estate agencies and was once seen as a barometer of housing prices in the capital, was almost empty.

There are roughly 40 real estate agencies within the store, which sits at the entrance of an apartment complex across from Lotte Department Store. However, it has been a long time since any of them greeted a customer as the domestic market, particularly in Seoul, has shown scant sign of recovery since going off the rails in recent years.

Several agencies representing Jamsil Jugong 5 Danji, more commonly referred to as Jamsil 5 Danji, have gone out of business, and only one apartment has been traded at the 3,930-unit complex in the first two weeks of this year.

This comes almost in defiance of the fact that the neighborhood served as a key engine driving up apartment prices in Seoul and neighboring Gyeonggi in the mid-2000s, a trend that led the former Roh Moo-hyun administration to adopt strong countermeasures, including a comprehensive real estate tax.

“In previous years, 50 to 60 apartments were bought and sold in a single month,” said Choi Myung-seop, who runs one of the real estate agencies at the complex. “The situation today seems far worse than when the global economic crisis hit in 2008.”

Moreover, neighboring apartment complexes, including Jamsil III, which has 5,678 apartment units, were in similar straits.

“I have been dealing with apartments in the Jamsil area for 23 years, but this is the first time I’ve seen trading hit such a low as this,” said Choi, adding that the market is struggling to find buyers despite a recent drop in prices.

In the first two weeks of January, only 632 apartments were reported to have been traded in the capital, according to the local city government. Trading is likely to be further thinned out this month by the Lunar New Year holiday, which officially ended yesterday, a period when commerce all but grinds to a halt for several days.

The situation now compares poorly with 2008, when 1,200 apartments were traded on average each month regardless of the impact of the global credit crunch.

As a result, the prices of apartments that were once highly prized have been tumbling. Recently, a 114-square-meter (374-square-feet) apartment at the Raemian Firstige complex was up for sale for 1.2 billion won ($1,064). Last August, it would have cost 1.6 billion won.

“Some owners are just asking us to get rid of the apartment at any price,” said one agent.

Market experts say that strong pessimistic sentiment is clouding the housing market. According to a study by the Korea Research Institute For Human Settlements, most people are skeptical of buying houses as they suspect prices are unlikely to rise - in the short term at least.

The housing consumption sentiment for this month fell below 100 for the first time since the study was first made in July. A reading below 100 indicates that the majority of people surveyed did not believe apartment prices would go up.

“Who would spend huge amounts of money buying a house when the financial situation is so bad due to the stagnant economy and rising consumer prices?” said Lee Soo-wook, head of the property market research center at the institute.

Meanwhile, regulatory changes appear to have further distressed sales as the government stopped offering tax exemptions on apartment purchases at the end of last year.

Now the pinch is also being felt in the already struggling construction industry.

“As it will be difficult to secure cash, the crisis facing the construction industry will only get worse,” said Kim Dong-soo at the Korea Housing Association.

One of the problems is that the government’s measures to tackle these problems are not yet showing any results.

The Ministry of Land, Transport and Maritime Affairs said late last year that it would increase the number of apartments traded in the Seoul metropolitan area to 15 percent from 2011. But so far, the market is sliding in the opposite direction.

The government has also tried to free up the market by lifting many of the regulations that were implemented before 2008, when housing prices shot up. It also announced a comprehensive list of measures to revive the frozen housing market, including the decision not to impose taxes when owners sell one of their two apartments.

The government even considered lifting bans on additional loans for buying houses in three major districts in Gangnam, where speculation was once rampant.

Revoking this ban was seen as a desperate and last-ditch measure, and it was finally excluded from the regulatory changes announced on Dec. 7 due to strong protest from the Ministry of Strategy and Finance. The ministry argued that removal would simply pave the way for a snowballing debt crisis.

Moreover, as Europe continues to wallow in its own debt problems, Korea’s real estate market could get worse.