Signs of a growing acceptance of Muslims in Korea

Signs of a growing acceptance of Muslims in Korea 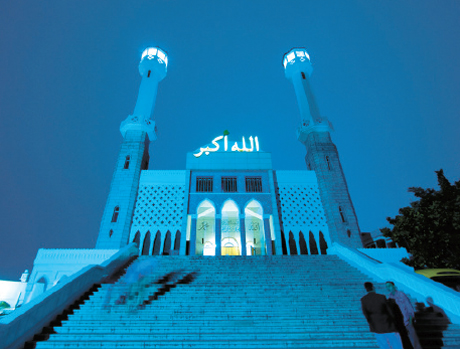 The nation’s first Islamic mosque was established in 1976 after the government of Park Chung Hee donated a plot of land in Hannam-dong, central Seoul, spanning around 5,000 square meters (53,800 square feet). [JoongAng Ilbo]

Every night from 9:30 p.m. to 10 p.m., dozens of Muslim students gather in a room at a dormitory at Seoul National University to pray.

The 100-seat room, which Christian students use for prayer in the morning, opened its doors to Muslim students last October following consistent requests from the students.

SNU is the first domestic educational institution to have an official Islamic prayer room. Of the 1,200 students from 88 countries worldwide at the school, Muslims account for over 8 percent of the student body.

“It wasn’t an easy decision to allow students to enter the room at such a late hour, due to safety concerns,” said Kim Sung-hee, the housemother of the dormitory and a professor in the art department. “But the space is there for the sake of religious equity and cultural diversity.”

The decision is one of a few signs that Koreans are embracing the growing population of Muslims in Korea.

According to the Korea Muslim Federation, there are an estimated 92,000 Muslim expatriates here, largely because of an influx of foreign workers from countries such as Indonesia, Pakistan and Uzbekistan.

Although the federation said there are an estimated 45,000 Muslims among Koreans, official data from the government does not yet exist. The 2005 census conducted by Statistics Korea included a survey of religions practiced in Korea, but Islam was excluded. In the 2010 census, the question on religion was omitted.

Yet despite the rise in the Muslim population, Korea has a ways to go in understanding the religion of Islam, its culture and its people.

Or as Lee Hee-soo, professor of cultural anthropology at Hanyang University and one of the nation’s few experts on Islam, said, “It wouldn’t be far-fetched to say that Koreans are completely ignorant of Islam, although the Sept. 11 attacks made them more interested in the culture.”

Until 2001, there were just 67 Korean-language books on Islam. But the figure almost doubled between 2001 and 2005, according to Lee, who is the author of one such book.

An updated version of his 2001 bestseller, “Islam: Ten Years after Sept. 11 and the Changed Muslim World,” was published in December.

The scholar, who has studied Islamic culture for over three decades, says that Korea has a long history of ties with Islamic countries. Trade began in the seventh century and a sizable number of Muslims lived in Korea during the Joseon Dynasty.

In the 1970s and ’80s, over 1 million Korean workers went to the Middle East to help build infrastructure.

“Now, Korean cars run on the roads that Koreans constructed and people there watch Korean dramas on TVs made in Korea,” Lee said. “But Koreans need to shift their ideas about Islamic regions even further and try to accept the people and their culture with a more flexible attitude.”