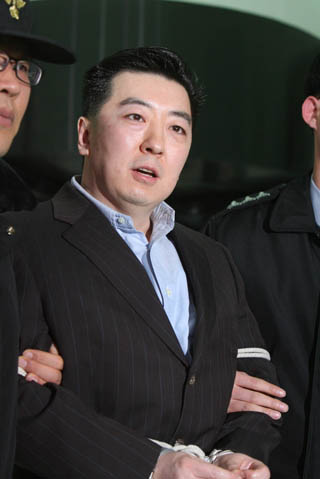 The prosecution has launched an investigation into an alleged conspiracy between a relative and aide of President Lee Myung-bak to launch a smear campaign against the liberals on the eve of the 2007 presidential election to save Lee from a corruption scandal.

It was part of the so-called BBK scandal that rocked Lee’s candidacy in the final months of the campaign.

The BBK scandal was a twisted one, and some history is necessary to understand the new investigation. In August 2007, a former business partner of Lee, Kim Kyung-joon, made the accusation that Lee was the actual owner of the investment firm BBK, which went bankrupt and wiped out investments by 5,200 investors in 2000. He said Lee was the beneficiary of a massive financial fraud. 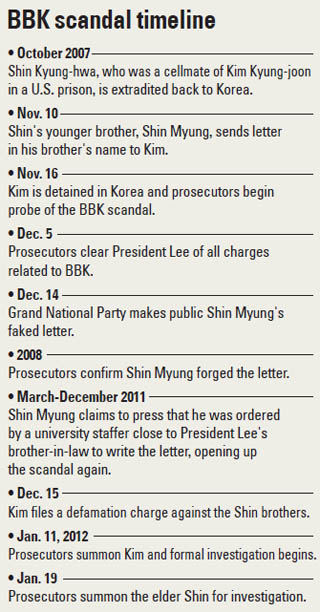 Kim, who was in jail in the United States for other crimes, was extradited to Korea on Nov. 16, 2007, and the prosecution launched an investigation into his accusation. On Dec. 5, 2007, the prosecutors cleared Lee of all charges linked to BBK.

Then came the letter that is now the center of an investigation. On Dec. 14, the GNP made public a letter sent to Kim by his former cellmate in the United States, Shin Kyung-hwa, claiming that the Roh Blue House and the ruling DP were behind the plot to attack Lee.

“My dear comrade Kim Kyung-joon,” the letter said. “I think what we had seriously discussed was clearly wrong. No matter what promise you made with the ‘big house,’ it is just us who were being abused.”

The GNP said the letter was evidence that the Roh Blue House and the DP had arranged Kim’s return to Korea to attack Lee.

Afterward, the prosecution began investigating who was behind Kim’s return. During a probe in early 2008, prosecutors obtained testimony from Shin’s younger brother, Shin Myung, that he had forged the letter. At the time, he claimed that he had created the letter for his brother and no one had ordered him to write it.

The scandal, however, was reopened again last year after Shin Myung claimed that he was ordered by a university staffer, on behalf of President Lee’s brother-in-law, to create the letter. In media interviews last month, Shin also said the president’s closest aide was in charge of the case.

After the interviews, Kim, Lee’s former business partner in the BBK scandal, filed a defamation charge against the Shin brothers.

After Lee was cleared of any BBK-related charges, Kim was sentenced to eight years in prison and fined 10 billion won ($8.9 million) for making false accusations against Lee and for financial crimes.

Kim, currently imprisoned in Cheonan, South Chungcheong, filed a complaint last month that he was defamed by the forged letter released by the GNP because it led to the public believing that he came back to Korea on the directive of the Roh Blue House and the Democratic Party.

On Jan. 11, the Seoul Central District Prosecutors’ Office summoned Kim and questioned him about the case. The probe, intended to reveal who was behind the creation of the letter, is likely to have an explosive impact on the April 11 legislative elections.

“Since Shin Myung claimed there were wire-pullers behind the fake letter and the media reported about the accusation, we have to get to the bottom of the story,” said a prosecutor.

The Seoul prosecutors obtained testimony from Shin Kyung-hwa that his younger brother had created the letter.

According to the prosecutors, Shin Kyung-hwa, wanted for robbery, had fled to the United States but was captured there.

In 2007, he shared the cell with Kim in Los Angeles. Shortly before Kim’s extradition to Korea, Shin was sent to Korea in October 2007 and was ordered to serve five years in a Korean prison.

With his testimony, the possibility grew that the probe will expand to the university staffer and other politicians.

“My younger brother told me that he had created that letter to help me,” Shin was quoted as telling the prosecutors. “I had known the truth all along, but I had kept it a secret to protect my younger brother because it could bring an enormous political aftermath. So for some time, I just pretended that I had written the letter.”

He, however, told the prosecutors that he does not know who was behind the letter’s creation.

The prosecution said Shin’s younger brother left for the United States at the end of last year, but it will ask him to return to Korea to submit to the investigation. The prosecutors are also mulling when to summon the university staffer and other people whom he claimed were behind the letter’s creation.