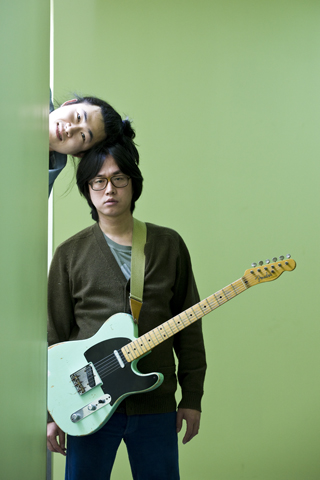 There is always a meaning or story behind a name, and Goonamguayeoridingstella is no exception. Although the band’s name may sound like gibberish, it means “old man and woman riding a stellar car.”

As difficult as it is to understand why the band would name itself after an old man and woman riding a stellar car - rumor has it, the name is a combination of the members’ favorite words - it is a bigger challenge to define the group’s music.

Goonamguayeoridingstella is a two-man act. Guitarist and lead vocalist Joe Woong, 33, teamed up with Lim Byeong-hack, 31, on the bass guitar to form the multidimensional, cross-genre duo.

The two spoke of how they met and their future gigs in an interview with the JoongAng Ilbo.

Woong and Lim met over 15 years ago when they were high school students, but the band wasn’t formed until they were in their early 20s. The first time they played music together, it clicked.

The duo decided to live together in order to focus on their music and ran a bar in front of Kyung Hee University where they practiced in their spare time.

Goonamguayeoridingstella has performed throughout the years, but the ride hasn’t been easy for either musician.

In 2007, Woong thought of quitting the group and moving on, leading Lim to contact studios in hopes of salvaging the band. “I sent all the music we worked on for the last few years and sent it to Cavare Sound,” Lim said.

“The title [of the album] represents our desire to make our own independent music,” Woong said. The album consists of modern rock, dance, reggae and bluesy tracks.

“We are not concerned with how our music is labeled as long as people are able to dance along to our songs,” Woong said.

Their free spirit and unusual lyrics have connected with audiences not only in Korea but in Japan as well. Goonamguayeoridingstella has been selected as a representative of the Korean indie scene to perform at the Seoul-Tokyo Sound Bridge, to be held in both cities this February.

“The fact that we are going to perform at the Seoul-Tokyo Sound Bridge makes us feel like true musicians,” Woong said.

The Seoul-Tokyo Sound Bridge is an annual concert that began in 2010 with two indie groups each representing Korea and Japan.

Goonamguayeoridingstella along with Delispice has been selected as representatives of Korea, while Andymori and Winners will perform on behalf of the Japanese indie scene.