Defector volunteers to give back

Defector volunteers to give back 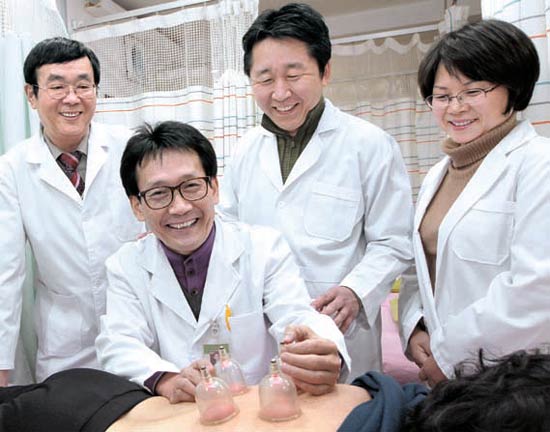 Seok Yong-hwan, second from left, treats a patient with an Eastern medical procedure Thursday at his clinic in Seoul. He and the members of his association will offer free medical care to elderly patients. Pictured, from left, are Choe Yun-mo, Seok, Jon Chul-wu and Shin Kyong-sun. By Oh Jong-taek

Seok Yong-hwan, a 47-year-old North Korean defector who was once a renowned doctor in his homeland, has launched free medical treatment programs for elderly people in the South with 20 other defectors like himself.

Association members will make door-to-door visits every month to around 200 elderly people suffering from chronic diseases in Jongno or Mapo Districts starting in February.

“It’s mandatory for North Korean doctors to learn both Eastern and Western medicine, which means we have two different kinds of knowledge,” said pharmacist Ri Kyong-hui, 50, who is a member of the association. “That makes us the best volunteers.”

On Thursday, Seok convened a meeting about the volunteer program at the 100 Years Clinic in central Seoul, which he also founded.

His list of volunteers includes Choe Yun-mo, 57, vice president of the 100 Years Clinic and a graduate of Sinuiju University and Park Su-hyon, 46, the former president of Myohyangsan hospital. Park has two brothers here who also passed the medical licensing exam. Other well-known North Korean defectors are also participating in the volunteer program, including Shin Kyong-sun, 43, the CEO of a trading company, and Jon Chul-wu, president of Korean Food Noodle & Rice. Jon previously volunteered to distribute soup to 200 elderly people at a local community center last month.

Many of the association members said that the reason they wanted to volunteer is related to the parents and family they left behind.

Seok said he was sorry for leaving his parents, who are in their 60s, and three siblings in Kapsan, Ryanggang Province.

“I have a lifetime debt to pay for leaving my parents, who must be in a gulag because of my defection,” he said.

Group members also said they were motivated by their successful settlement here and wanted to do something to repay the support they’ve received from the government.

“When I first arrived here, I received 37 million won [$32,947] as my initial settlement fund,” Seok said. “Now, I am settled enough to pay the same amount in tax. I think we should help other North Korean defectors settle in the South.”