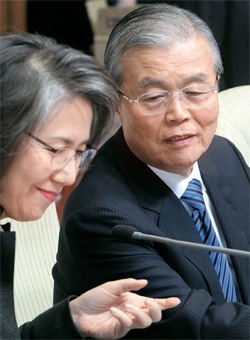 The ruling Grand National Party has drafted a new party constitution highlighting the social responsibility of large companies, a herald of new conglomerate-bashing policies from the traditionally business-friendly party. A first draft of the new constitution was unveiled yesterday during a meeting of a policy reform subcommittee under the party’s emergency council led by former chairwoman Park Geun-hye.

“It cannot become a level playing field market,” said Representative Kwon Young-jin, a member of the subcommittee, after the meeting, “if the chaebol, driven by excessive greed, disrupt the market order, infringe on the realms of small and mid-sized companies and self-employed businesses and deprive them of the right to survival.

“From that perspective, we will steer our policies in the direction of strengthening the social responsibilities of chaebol,” he said.

The party has attempted to transform its image to being more working-class friendly in recent months as the public grows discontent with economic conditions, which some blame on the pro-big business, pro-rich policies of the Lee Myung-bak administration.

The party is working on several reform measures relating to conglomerates, including ways to ameliorate the effects of an abolition of a regulation that prevented conglomerates from investing in their subsidiaries. The regulation, which the Lee administration scrapped in 2009, was put in place in 1987 to prevent unbridled expansion of large companies. Political analysts said the GNP will announce the policies as it enters the campaign for the general election on April 11.

In the draft of the new constitution, increasing welfare benefits and job creation were priority policies along with economic “democratization,” which is also in the constitution of the largest opposition party, the Democratic Unity Party.

Democratization of the economy is also a concept enshrined in Korea’s constitution as a guiding principle for the country’s economic activities.

The second clause of the Constitution’s Article 119 reads, “The state can regulate or adjust the economy for the democratization of the economy, which can be achieved through balanced growth and stability of the national economy, maintenance of appropriate distribution of income, prevention of market dominance and misappropriation of economic power and harmony among the economic players.”

“The opposition group approaches democratization of the economy from the perspectives of fair distribution,” Kwon said, “but the Grand National Party approaches it from a wider perspective of a fair economy, which is to protect small and mid-sized enterprises and consumers against colossal economic forces.”

Kwon said the new constitution will also include a more flexible stance toward North Korea than the Lee administration’s.