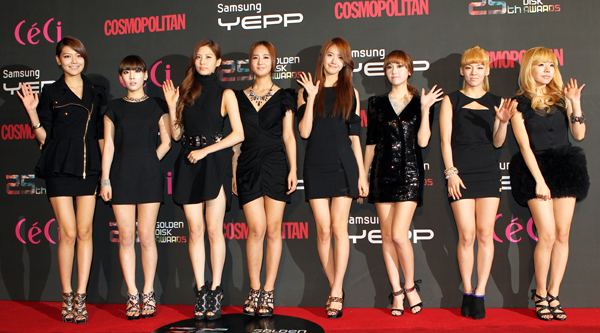 Girls’ Generation has made a mark on the U.S. music industry as its new album, “The Boys,” has ranked second on the Billboard World Albums chart of international music. The album, which was specially produced for American and European markets, also came in 22nd place on Billboard’s Heatseekers Album chart, which ranks newcomers according to their record sales. The title track from the album, released on Jan. 17, was produced by the famed U.S music producer Teddy Riley, who also produced Michael Jackson’s albums.

The group is set to further boost its image in the U.S. through TV appearances on two of the nation’s favorite talk shows. The girls will appear on “Late Night with David Letterman” on Jan. 31 and on the morning show “Live with Kelly” on Feb. 1. Both gigs were arranged to promote the album “The Boys.”

Earlier in the month, the band was in Hong Kong for its first solo concert. Meanwhile on Jan. 16, Oricon Japan announced that the girl group’s first Japanese album has sold some 780,000 copies since being released in June of last year.