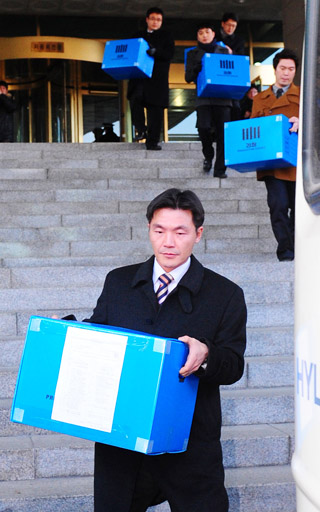 Investigators from the Seoul Central District Prosecutors’ Office carry boxes containing documents from the Ministry of Foreign Affairs and Trade office building yesterday in central Seoul after they raided the office. [NEWSIS]

The prosecution raided the Ministry of Foreign Affairs and Trade yesterday, beefing up its investigation into a diamond mine scandal involving a senior diplomat and several other high-profile figures.

Investigators from the Seoul Central District Prosecutors’ Office entered the offices of Ambassador Kim Eun-seok and several lower-ranking ministry officials yesterday morning to seize hard disks of their computers and other documents they used for the diamond mine deal in question, sources with knowledge of the raid said.

They also confiscated some documents from the ministry’s information database room, including documents between the Foreign Ministry and the Cameroon government regarding cooperation on the deal, the sources said.

It is the first time the prosecution raided a government agency regarding the case, which centers on suspicion that government figures helped an obscure local developer artificially inflate its stock prices using a shady diamond deal with Cameroon.

Last Thursday, the prosecution raided the headquarters of the developer, CNK International, and several workplaces of others thought to be connected to the scandal.

The prosecution is planning on summoning high-profile figures involved in the scandal such as Kim and Cho Jung-pyo, an executive of the company who was formerly Kim’s boss at the Prime Minister’s Office, as soon as it finishes an analysis of the data it confiscated.

The Board of Audit and Inspection referred Kim, the country’s energy resource ambassador, to the prosecution for investigation last Thursday, saying he deliberately promoted the deal by issuing a promotional press release on Dec. 17, 2010 detailing exaggerated diamond reserves. The deal was referred to as an exemplary case of resource diplomacy for Korea in the press release.

The BAI said Kim’s two younger brothers purchased stocks in the company before the press release came out. Cho, known to have made some 1 billion won ($887,470) from trading the stocks of the company, was also referred to the prosecution by the financial authorities on Jan. 18.

The prosecution, looking into a possibility that other government figures are also involved in the scandal, is investigating 59 bank accounts through which people made profits from CNK’s bonds.

CNK is known to have attached 3.7 million shares of its stocks for warrant bonds and sold them to between 30 and 50 people. Warrant bonds enable bond holders to buy the stocks of the bond issuer at a fixed price and thus benefit from the margin of the stock prices when the stock prices rise.

The prosecution’s investigation is focused on whether the company’s chairman, Oh Deok-gyun, sold or gave them to any incumbent political or government figures to earn their favor regarding the deal.