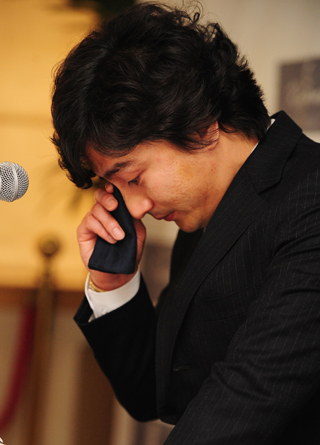 Ahn Jung-hwan wipes tears from his eyes during a press conference in Seoul yesterday. [NEWSIS]

Ahn bid an emotional farewell to fans at a press conference in Seoul, saying he was lucky to have received such strong support and affection throughout his career. The 36-year-old fought back tears throughout his statement.

“Today will be the last day I will be called football player Ahn Jung-hwan,” he said. “It’s been 14 years since I put on my boots [as a professional player], but I’m going to wrap it up and I am looking forward to the challenges of a new life.”

Ahn made his professional debut with the Busan Daewoo Royals, now Busan I’Park FC, in 1998 and won the K-League’s MVP award in 1999. He moved on to Italian Serie A club A.C. Perugia on loan in 2000 and then played in Japan (Shimizu S-Pulse, Yokohama Marinos), France (FC Metz) and Germany (MSV Duisburg). The forward returned to Korea in 2007 with stints with the Suwon Samsung Bluewings and Busan, where it all began. He finished his career in China.

“Since 2000, I’ve experienced football around the world,” Ahn said. “While my career could be called a success or failure either way, it was a time in my life during which I had a lot of luck and joy.”

Ahn gained his international celebrity status when he headed in the golden goal against Italy in the round of 16 at the 2002 FIFA World Cup, co-hosted by Korea and Japan, and played a pivotal role in Korea’s semifinal finish in the tournament.

Ahn also scored a goal in the 2006 FIFA World Cup in Germany, leading the Taeguk Warriors to a 2-1 victory over Togo in the group stage. He was included on the national team roster during the 2010 FIFA World Cup in South Africa, but failed to make an appearance. Ahn, who made his international debut in 1997 while attending Ajou University, wrapped up his international career with 17 goals in 71 matches.

“I’ve been lucky to take part in three World Cups as a football player,” Ahn said. “There are many memories in my career, but above all, the 2002 World Cup in which I played in front of home fans with such a glorious moment remains the best.”

Ahn, who played his last three seasons with Chinese club Dalian Shide FC, was rumored to have been in negotiations with clubs in the United States and Seongnam Ilhwan Chunma FC of the K-League.

Ahn said Seongnam coach Shin Tae-yong made a phone call in hopes of convincing the forward to play, but in the end he made the difficult decision to hang up his boots, emphasizing that he wants to now spend more time with his family.

“Over my 14-year career, my family has made a lot of sacrifices and I want to spend more time with them,” said Ahn, who married former beauty pageant Lee Hye-won and has two children. “My mind is in 2002, but my body is in 2012. I thought I could play more on the pitch, but I had pressure to perform well and it left me with tears.”

It was reported that the Korea Football Association offered Ahn a “retirement ceremonial match,” during which the forward would play for the national team one last time for a brief period in a symbolic gesture of gratitude to end his career, but the striker said he declined. The Taeguk Warriors face Uzbekistan in a friendly on Feb. 25 before hosting Kuwait in a crucial third round Asian qualifier for the 2014 FIFA World Cup.

“I want to have a retirement ceremonial match, but this is a critical moment for Korean football,” Ahn said. “I just felt it would be detrimental to the development of our football if I played before an important game and I don’t think it’s appropriate to put my personal matters ahead of the World Cup.”

For now, Ahn said he hopes to rest and help his wife’s cosmetics business for a while. However, as a footballer who received a lot of support from fans, he said he wants to give back to the development of Korean football.

“I’ve been thinking a lot about youth football,” Ahn said. “In order to develop the sport, we should have a strong foundation, so I want to help from the beginning.”

Ahn said he would accept the position of honorary ambassador for the K-League if he gets the offer, but added he doesn’t have thoughts on coaching professional teams, at least for now.