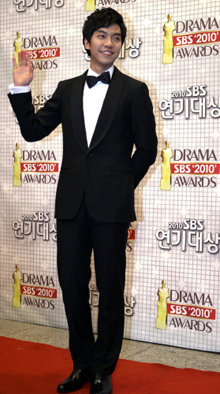 Singer Lee Seung-gi will be the narrator of a new variety show entitled, “The Romantic” on tvN.

The channel confirmed the singer’s participation on Feb. 1 and said that Lee agreed to take part due to being good friends with the production crew of the program. “Lee became close to the crew through the show ‘1 Night, 2 Days,’ and happily agreed to narrate the program,” said a representative from tvN.

The new show, produced by program director You Hak-chan and writers Lee woo-jung and Kim Dae-joo, is a reality show where men and women in their 20s and 30s find love as they take a holiday together. The first episode is set to air on Feb. 11.

Meanwhile on Jan. 30, Lee was in Tokyo to hold a press conference to talk about his hopes as he made his debut in Japan. The Korean superstar sang his hit single “Because We’re Friends” as well as his first song in Japanese “Alone in Love,” which is set to be released on March 6. Lee also announced that his first Japanese concert will be on June 1 at the Nippon Budokan in Tokyo.