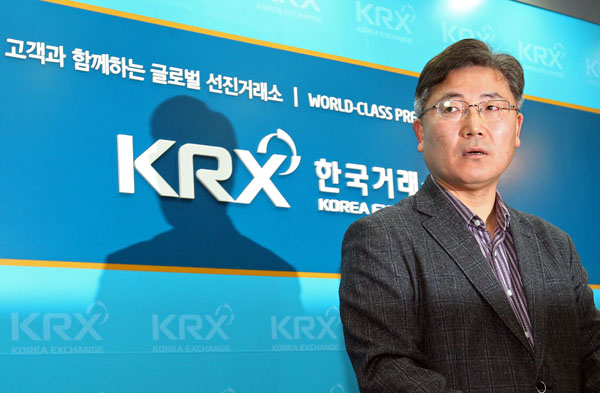 Cho Jae-doo, director of the Korea Exchange, announces that Hanwha will not be delisted during a press briefing held at the KRX’s headquarters in Yeouido, western Seoul, yesterday. [YONHAP]

The nation’s bourse operator decided yesterday not to delist Hanwha, the holding company of Hanwha Group, despite the company’s belated notification on Friday that the chief of Korea’s 10th-largest conglomerate had been charged with embezzlement.

Trading of Hanwha’s stocks may be suspended for one day if the Korea Exchange decides to penalize the company for issuing a late notification after the market closed. Otherwise, trading will remain uninterrupted, the KRX said.

The bourse operator is now drawing flak from retail investors for what appears to be a rapid about-face after it warned that trading in Hanwha’s stocks would cease from today.

History of a scandal

Kim and four other executives are on trial for a number of charges, according to a commentary released by E-Trade Securities. They allegedly used 320 billion won in company funds to pay the debts of hidden affiliates between 2004 and 2006; sold stocks in Hanwha S&C and Dongil Petroleum, two affiliates, to Kim’s three sons at a cheap price; and handed out free call options in Korea Life Insurance stocks owned by seven of the group’s affiliates to Hanwha and Hanwha Construction.

On Friday, more than three hours after the market closed, Hanwha notified investors of the charges filed against Kim on the exchange’s public system. Prosecutors specified that 89.9 billion won had been misappropriated, amounting to 3.8 percent of Hanwha’s equity capital of 2.32 trillion won.

Under current Kospi regulations, a formal charge of embezzlement equivalent to more than 2.5 percent of the company’s equity capital serves as grounds for a possible delisting.

The KRX said on Friday that Hanwha’s stock trading would be suspended from today pending a review of whether it should be delisted.

This led to a flurry of investor panic over the weekend about the possibility that the flagship company of the Korean conglomerate would face suspension of trading and a consequent steep drop in prices. In terms of size, Hanwha ranks 81st on the Kospi and has a market capitalization of 2.9 trillion won.

However, after just two days of deliberations, the KRX held an emergency meeting yesterday morning and decided not to subject the company to a delisting review, meaning that Hanwha’s stock trading today is expected to continue uninterrupted.

According to a statement yesterday, Hanwha’s plan to bolster its operational transparency includes strengthening limits and oversight of the group’s internal transactions, empowering compliance officers to be chosen at a later date, and adding more oversight functions to the board of directors and auditing committee.

The embezzlement charges were first raised by prosecutors roughly one year ago, and the KRX will decide this month whether to suspend trading by one day to penalize the company for its late announcement, said Seo Young-wan, a KRX official in charge of notifications.

In Korea’s checkered corporate history, dominated by family-owned chaebol, numerous owner-executives of powerful conglomerates have been charged with embezzlement or breach of trust in the past. However, this is the first time the prospect of a delisting review has been made possible due to revised regulations introduced last April.

But industry insiders claim Hanwha was never at serious risk of being delisted. “Unless the outcome of the major shareholder’s breach of trust cripples the financial structure of the company, a delisting is unlikely,” Seo said. Other Kospi-listed companies that have seen similar charges brought against their major shareholder, such as Maniker or Bohae Brewery, managed to avoid being delisted despite the fact that the percentage of embezzled funds was much higher in both cases - 26.2 percent and 71 percent of equity capital, respectively. However, some retail investors of Kosdaq companies are crying foul, saying that companies in similar straits on the secondary market are easily given the boot.

“On the Kosdaq, where a lot of retail investors choose to invest, a company is promptly delisted if it becomes embroiled in embezzlement,” said one writer on Paxnet, a popular investment community. “Keeping Hanwha listed is unfair as most institutional and foreign investors make up the bulk of its shareholders.”

Other observers asked whether the lightening-fast two-day deliberation of whether Hanwha would go up for review was sufficient, especially as the stocks of both Maniker and Bohae Brewery were suspended from trading for more than three weeks before undergoing or avoiding such a review.

But experts say the KRX had little choice as it must also pay attention to the possible ripple effect on the market of such a decision. “The KRX had to reverse its position due to what effect a suspension would have on the benchmark index or the fund market, not to mention Hanwha’s more than 40,000 investors,” a researcher at the Korea Capital Market Institute told the JoongAng Ilbo.

While some investors have accused the KRX of favoring big business in the case, others fear stock prices of Hanwha and other affiliates will take a hit as Kim’s harmed reputation takes its toll.