Two sent back to North as moles

Two sent back to North as moles 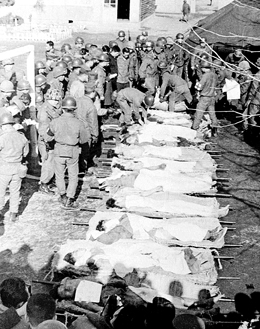 The corpses of the North Korean commandos killed during the Blue House, pictured on Jan. 25, 1968. Provided by the National Archives

They were captured alive and sent back to the North as double agents, said the 57-year-old defector, who trained in the 1970s at the same North Korean special military unit as the commandos dispatched to the South. He goes by the alias Hong Eun-taek.

Publicly, the government says 31 North Korean commandos attempted to raid the Blue House in what was one of the boldest North Korean attempts to assassinate a South Korean leader, and all were killed during the raid, except for one, Kim Shin-jo.

“The record left at the unit where I served said that 33 people were sent to the South and two of them escaped [to the North],” Hong said. 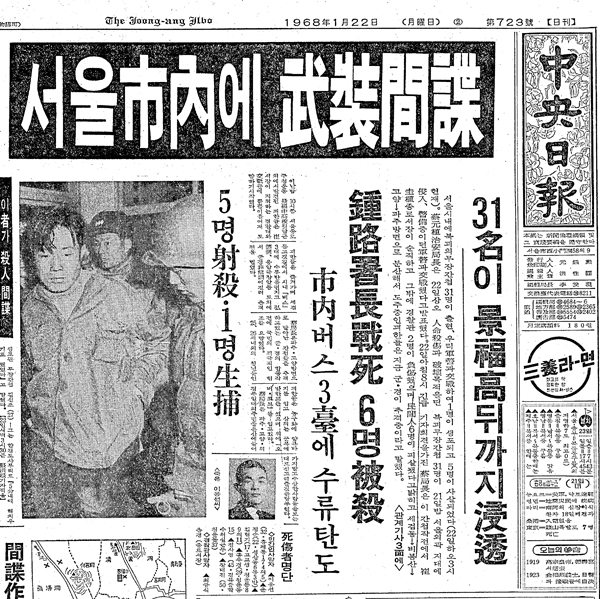 Hong served in the eighth battalion of North Korea’s 711 unit in the 1970s, which was the successor of the 124 unit that sent the commandos on the Blue House raid.

He identified the two North Korean commandos who returned to the North as Lim Tae-yong and Wu Myong-hun. Hong said Lim was the chief of the eighth battalion when he was serving there.

He said the two double agents were promoted to two-star or three-star generals after their return to the North.

But they were executed in 1998 when their spying for the South was disclosed.

Hong said there was a widespread rumor in the North Korean military of them being double agents right before their executions.

Hong claimed that another commando was also caught alive, of higher rank than Lim and Wu. The South tried to persuade the three to return to the North as double agents, and they resisted.

The higher ranking commando was beheaded with a farming implement in front of Lim and Wu, and terrified, they signed onto the plan and pledged allegiance to the South, Hong said.

They were returned to the North and told to advance as high as possible in the military, Hong said.

One of the North Korean commandos killed during the raid was indeed found with his head missing. Kim Shin-jo, believed to have been the only survivor, was forced to identify the bodies of his colleagues after the raid.

Kim Shin-jo became a South Korean citizen in 1970 and became a Christian pastor in 1997.

The defector who uses the alias Hong Eun-taek defected to the South in 2001.