Swiss woman marches to beat of own drum

Swiss woman marches to beat of own drum 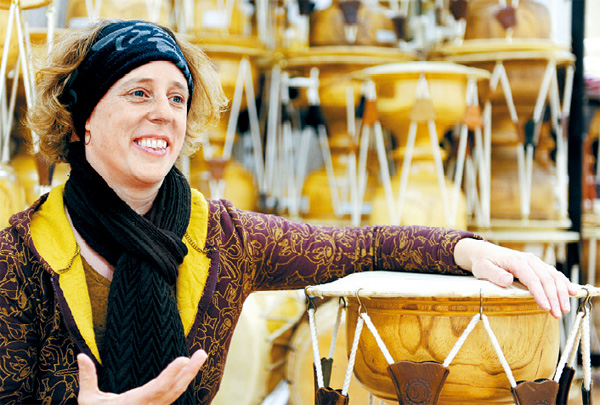 Hendrikje Lange, 43, who grew up in Switzerland, fell in love with samulnori (Korean percussion) eighteen years ago. Provided by National Gugak Center

A 43-year-old Swiss woman who had played harp since she was 12 years old made a decision to pursue a career in Korean traditional music after hearing a life altering performance of samulnori (traditional Korean percussion) 18 years ago and determined to become an expert, moved to Korea.

Hendrikje Lange currently resides in Cheonan, South Chungcheong, and will start a two-year master’s course in Korean Traditional Arts at the Korea National University of Arts in Seoul this coming March. She is the first foreign student to be accepted through the regular application process.

Lange’s path to Korean traditional music, or gugak, was winding, yet her passion for the music lead to her moving halfway across the world, leaving behind family, friends and a stable job in order to pursue her life calling.

Born in Bern, the capital of Switzerland, Lange was well-versed in classical harp and had little opportunity to hear Korean traditional music. In 1995, however, she heard a performance of samulnori by a traveling troupe which came to her country.

“In Switzerland, we are familiar with African and Brazilian drumming, like conga,” stated Lange. “But when I first heard samulnori, it just hit me. I immediately knew I wanted to learn it,” said Lange in an interview with the Korea JoongAng Daily on Jan. 31 in Cheonan.

“I was fascinated by the very special, dynamic energy and vitality in this music - it’s very joyful at the same time, there is a ritualistic side,” Lange stated.

Thus, she made her first visit to Korea in 1999 to learn samulnori and participated in a summer camp at the Samulnori School in Buyeo, South Chungcheong.

Though it was daunting coming to Korea without speaking the language she fell in love with samulnori all over again.

“People who like samulnori feel like a family, and I feel very much welcomed by these people, even if I couldn’t speak any Korean and my playing was very much beginner level,” Lange said.

She also became acquainted with Master Kim Duk-soo, a renowned samulnori performer and pioneer, and received formal training in janggu under Master Kim Dong-won, his student.

She has visited Korea every year since her first visit and in 2001 formed a group “Swiss Samul,” a samulnori group of four to five Swiss women that periodically visit Korea for competitions.

“In the beginning, we didn’t think ‘we have to win,’ but it was just about the joy of hearing samulnori all day,” Lange said. “We kept practicing and working, so later we thought more about winning.”

She finally came to the decision to move to Korea in the summer of 2010 because “the music, dance and singing, the traditional culture makes me feel homesick for Korea” and left everything behind “with a combination of a feeling that I had nothing to lose, and if I don’t try it, I will regret it my whole life.”

“Some people tried to stop me because they were concerned about my decision, especially because I am not in my 20s anymore, thinking ‘what is she doing giving up her life in Switzerland and taking the risk?’?” Lange, who had worked as psychomotor therapist, admitted. Even her mother was against her decision. But that did not deter her.

Swiss Samul was halted because they lost one of their key players. When Kim Duk-soo heard of Lange’s decision, he convinced her to apply to the Korea National University of Arts.

“I’m probably the first to enter through that method, but even so, I think they made some exceptions because I am a foreigner, and I cannot compete with a native who has been here all their life.”

When Lange first moved to Korea, she did not have a permanent home and drifted between staying with friends and even living in a temple. But she took drumming lessons and Korean language lessons and also taught English to other samulnori students. She currently studies Korean language at Dankook University in Cheonan and has become fluent to the point that oftentimes she interjects with Korean phrases to express her thoughts.

Her dream, after she completes her two year program of learning traditional Korean music, is to return back to Switzerland and teach samulnori.

Next month, school starts - with lessons conducted completely in Korean - and Lange will focus on samulnori, pungmul (folk music) and Shaman rhythms at school though “there are many things to learn and only two years.”