Another Giant victory for Eli

Another Giant victory for Eli 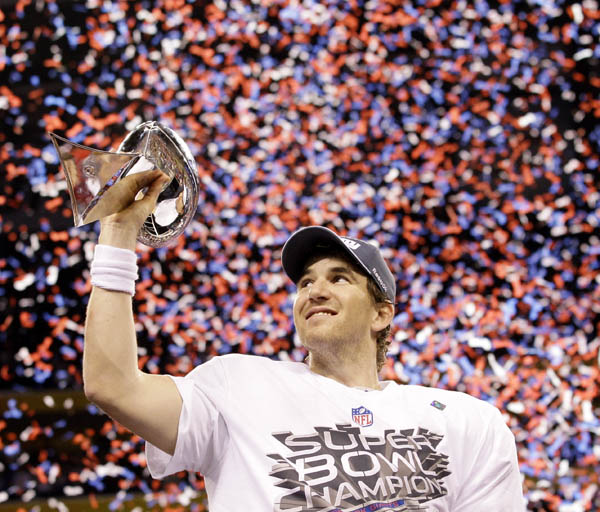 
INDIANAPOLIS, Indiana - Eli Manning won his second Super Bowl Most Valuable Player award Sunday night after guiding the New York Giants to a 21-17 comeback victory over the New England Patriots. He has grown to be a lot more than just Peyton Manning’s little brother now.

Manning had 30 completions from 40 throws for 296 yards, with one touchdown pass and zero interceptions. He opened the game by becoming the first quarterback to complete his first nine attempts in a Super Bowl. And he finished his work by directing the nine-play, 88-yard TD drive that put New York ahead with 57 seconds left.

“That was quite a drive that he was able to put together,’’ Giants coach Tom Coughlin said. “He deserves all the credit in the world, because he really has put his team on his shoulders all year.’’

The late drive, so reminiscent of the way New York beat New England in the 2008 Super Bowl, started on the Giants’ 12 yard line, with a little more than 3 1/2 minutes left and the Patriots ahead 17-15. It closed with running back Ahmad Bradshaw easing into the end zone from six yards out. The Patriots decided not to contest the run, trying to save some time on the clock for a final drive - an audacious decision by Patriots coach Bill Belichick.

But New England couldn’t get the ball back in the end zone, with Tom Brady’s final heave from his 49 falling barely beyond the grasp of tight end Rob Gronkowski.

Manning was also MVP in 2008, when he threw a scoring pass in the final minute to help New York upset New England and ruin the Patriots’ bid for a perfect season.

Back then, Manning got a boost from David Tyree’s Velcro-helmet grab on the key drive. This time, the key play was perhaps Mario Manningham’s 38-yard, over-the-shoulder catch between two defenders along the sideline, which held up after the Patriots challenged it.

The Giants had trouble putting up points Sunday despite getting into New England’s territory on every drive except a kneeldown at the end of the first half. But Manning kept at it.

“We just tried to be patient,’’ said Manningham, who finished with five catches for 73 yards. “Got to be patient with this game. We knew big plays [were] going to come. We just had to take advantage of them.’’

Manning now is one of only five players in NFL history with multiple Super Bowl MVP awards. He joined Brady, along with Terry Bradshaw, Bart Starr and Joe Montana (the only player with three). And Manning did it in the stadium where his older brother Peyton - a four-time regular-season MVP but owner of only one Super Bowl title - plays for the Indianapolis Colts.

“It just feels good to win a Super Bowl. Doesn’t matter where you are,’’ Manning said, clutching the silver Vince Lombardi Trophy. “It’s been a wild season. We had a great, tough bunch of guys who never quit, and had faith in each other. I’m proud of these guys sticking together.’’

As usual, he was as good as it gets down the stretch, in the crucible of the fourth quarter. During the regular season, he threw an NFL-record 15 TD passes in the final period.

“Eli’s certainly had a great season,’’ said Brady, who has 27 completions from 41 passes for 276 yards, with two TDs and one interception. He completed 16 consecutive passes in one stretch, breaking Joe Montana’s Super Bowl record of 13.

Manning led six game-winning drives to bring New York back from fourth-quarter deficits in the regular season. So it came as no surprise he was cool as could be Sunday, when he was 10 of 14 for 118 yards over the final 15 minutes.

“We’ve had a bunch of them this year,’’ Manning said. AP