Pressure rises for teachers to take action on bullying

Pressure rises for teachers to take action on bullying 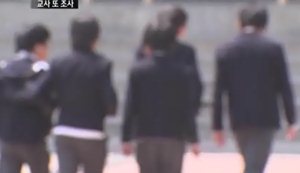 A second parent has filed a report claiming a teacher didn’t do enough to help a child who was been bullied.

According to the police, the parent in eastern Seoul’s Gangseo District made the report following a police investigation into a middle school teacher surnamed Ahn, 40, in Yangcheon District of western Seoul, upon one mother’s allegation that the teacher failed to take proper action to stop the continued bullying of her 13 year-old daughter, surnamed Kim, who took her own life last November.

On Tuesday, the National Police Agency announced that teachers who are believed to have neglected or covered up violent cases among students can be charged with violating their duties. The statement came a day after the government’s announcement of a set of countermeasures to root out school violence, which state that it will punish teachers who try to hush up cases of violence among students.

The Gangseo Police Precinct in western Seoul said yesterday that a father of a victim of school violence made a report insisting that the teacher of his son covered up the school violence case against his 12 year-old son, surnamed Lee.

According to the police, Lee was brutally bullied from March to December of last year at school and also after school by seven of his classmates.

Police said that the bullies even sexually harassed Lee numerous times by pulling Lee’s pants down and electrically shocking him. Lee is currently hospitalized receiving psychiatric treatment after being harassed at least 100 times, according to the police.

Lee’s father said in a statement he submitted to the police that “the principal and the teacher did not take appropriate actions despite being aware of such brutal violence against my son,” and insisted that “they should take responsibility for my son’s mental suffering.”

Police said they will soon summon the principal and the teacher as a witness to conduct an investigation into the case.

Kim’s mother, surnamed Park, 40, also said in a phone interview with the JoongAng Ilbo on Tuesday that she had been requesting help for her daughter who was being physically bullied, but no action was taken by any of the teachers.

“After noticing bruises on my daughter’s arms, I went to see the teacher and asked if I could meet the bullies but the teacher told me to trust him to deal with it and just wait,” said Park.

As police launch investigations on reported teachers, the Korean Teachers and Educational Workers’ Union expressed discomfort, expressing that “it is not right to only hold teachers and schools responsible for school violence.”

The Korea Federation of Teacher’s Associations agreed and said, “Teachers have to take active roles as people who prevents and solves problems at school including violence, but all these investigations will weigh on the minds of the teachers.”