Curbing your appetite is as easy as changing colors

Curbing your appetite is as easy as changing colors 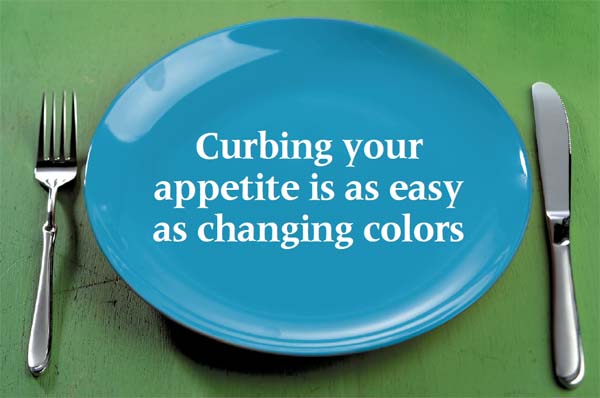 If you’re looking to shed a few winter pounds, curbing your appetite may be as easy as changing your tableware. Or at least changing the color. 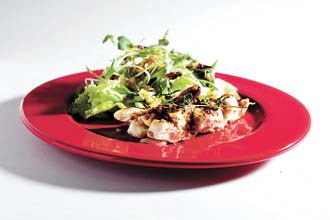 One of the most popular searches on the Internet these days is for photos of blue foods such as blue ramen, blue tteokbokki (rice cakes in hot sauce) and blue samgyeopsal (pork belly) on a bed of white rice. The photos, awash in blue through the magic of Photoshop, have spread quickly around the Internet and are being touted as appetite suppressants.

Lee Min-a, 31, who is a member of an online dieting club, said that posting pictures of blue food on her refrigerator has made her think twice about whether she is really hungry.

“It’s amazing that appetite can be diminished just with color,” she said. 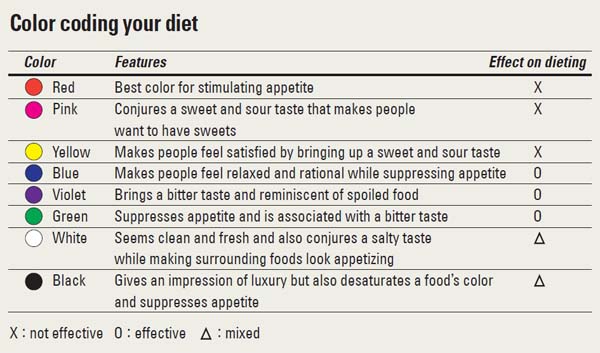 But is there scientific backing to the effect of color on eating habits? There is, according to a study to be published in the Journal of Consumer Research in August.

The study, “Plate Size and Color Suggestibility,” explores the role that color contrast plays in eating and shows the difference that the color of your plate and even your tablecloth can make in what and how you eat. In the study, 225 students were given pasta with either white or tomato sauce on either a white or red plate. The study found that students who ate on white plates ate 21 percent less than those who ate on red plates. Researchers also experimented with the color of the tablecloths under the plates and found that those who ate on white tablecloths ate 10 percent less than those who ate on red ones.

Kim Sun-hyeon, a professor at CHA University’s College of Medicine, affirmed this, saying that red is known to stimulate the appetite and the brain’s emotional center while blue has the opposite effect.

“The region of the brain that processes what we see shows different activity depending on the color being viewed,” Kim said. “For example, the brain is said to work rationally when it accepts blue. Blue is also effective in suppressing the appetite because we have associated blue with poison or a bitter taste since ancient times.”

He said restaurants exploit this fact in their decor, forgoing blue in favor of red in order to get you to eat more.

“That includes fast-food restaurants such as Lotteria, KFC, and Burger King as well as family restaurants including Outback Steakhouse, VIPS Steak and Salad Restaurant, and T.G.I. Friday’s,” Kim said.”

Surprisingly, none of this is new information. The ideas behind these studies fall in line with what we know about ancient eating practices, according to Park Gwang-su, the head of the Color Care Consultant Association, which specializes in color therapy.

“Royal and noble families in both the East and West used blue plates to control portion size and avoid overeating,” he said.

Pale violet is another color known to be effective in appetite suppression, he said, and was also a favorite color of the nobles because it was mysterious and distinctive. But it was not often used for tableware, most likely because it conjures up images of spoiled food and bitter flavors, Park said.

Green also suppresses the appetite. Like violet and blue, it is associated with a bitter taste.

This reaction to the color is especially strong in children, according to Dr. Han Gwi-jeong of the Agro-Food Resources Department at the National Academy of Agricultural Science.

“Children can lose their appetite when they see green because, unlike adults, they don’t yet understand that vegetables are healthy,” Han said. “Giving a child vegetables that are not only green but also yellow or red could encourage them to eat more of what’s on their plate.”

According to Park, blue tableware is recommended for people trying to lose weight, and parents are advised to use red or yellow dishes and silverware when feeding children to encourage them to eat. For people who are suffering from a loss of appetite, such as cancer patients or the elderly, decorating food with a colorful garnish could stimulate hunger, just as the University of Chicago study showed.

Yet Eastern medicine views our cravings differently. According to Kim, each organ is assigned a color based on the concepts of yin and yang and the five elements of metal, wood, water, fire and earth. If an organ fails to function, the body tries to replenish lost energy by encouraging you to eat foods that are of the same color as the organ that isn’t functioning. Among the other major organs, the liver is blue, the heart is red, the stomach is yellow, the lungs are white and the kidneys are black.

Under this theory, people who are having liver problems often crave adzuki beans, which appear blue after boiling. Peas and leafy green vegetables, which contain vitamin B2, are also good for the liver. Similarly, a person with a weak heart may crave red wine or whisky made of red plants such as grapes and sorghum instead of beer. A person with weak lungs may want white rice instead of rice with beans or grains, while a person with weak kidneys may crave black foods such as black soybeans or seaweed.