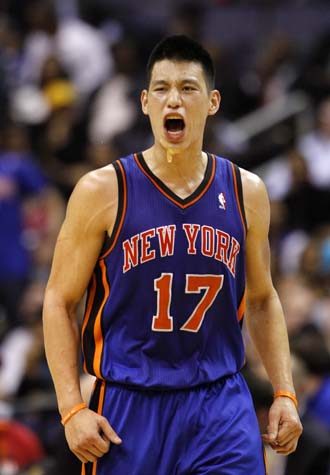 New York Knicks point guard Jeremy Lin celebrates his dunk during the second half of the NBA basketball game against the Washington Wizards on Wednesday in Washington. The Knicks won 107-93. [AP/YONHAP]

WASHINGTON - In the course of a week, Taiwanese-American Jeremy Lin has gone from basketball obscurity to being the NBA’s newest playmaking sensation.

The New York Knicks guard has earned more than 60,000 Twitter followers in just five days. Now, he also has his first NBA dunk.

Lin had 23 points and a career-high 10 assists in New York’s 107-93 win over the Washington Wizards on Wednesday.

Late in the third quarter with the Knicks up by four, Lin drove past three Wizards players and suddenly was alone in front of the hoop. He slammed it through with his right hand.

“Just one of those in-a-moment things,’’ Lin said. “They messed up on their coverage, so I was able to get free.’’

In his previous two games, Lin had 25 points against New Jersey and 28 more against Utah in his first start - both wins. Now, the Harvard graduate had to go on the road, but instead of facing a hostile crowd, Lin found an adoring one.

The fans cheered louder for Lin than for any other player in introductions, waving Taiwanese flags and signs - including one that read: “Linning and Grinning.’’

By the time the game ended, the crowd was chanting for him as he walked off the floor.

“Like I said after the last game, I wouldn’t have imagined this,’’ said Lin, who was undrafted in 2010 and played his rookie season in Golden State.

“Thanks to them for coming out and they came out strong for the Knicks tonight,’’ he added. “We had a lot of energy that came from them.’’

When the Knicks last played here on Jan. 6, Lin didn’t play at all. With their two leading scorers missing - Carmelo Anthony gone for a week or two with a strained right groin and Amare Stoudemire mourning the loss of his brother - New York desperately needed Lin’s scoring this time around.

He didn’t single-handedly make up for the 40 points that Anthony and Stoudemire provide, but surely energized the decidedly pro-New York crowd.

“He just does everything easy and the rest of the guys around him are playing the way we want to play,’’ New York coach Mike D’Antoni said.

Wizards coach Randy Wittman knew about Lin from a close relative. His son played against Lin in college. Ryan Wittman, who played for Cornell, sent his father a sarcastic message during the game.

“He told me that they did a much better job guarding him than we did tonight,’’ Wittman said.

“I already had that text message before the game was over. Makes Dad feel good.’’

The Knicks shot just 25 percent in the first quarter and trailed 23-17. Lin missed all three shots he attempted, and moments after the third, he was called for his second foul and sustained a gash and left the game with 4:06 to play.

Lin returned about two minutes into the second quarter and scored eight points - on three layups and a pretty 17-foot bank shot just before halftime.