Saenuri lays out policies to hem in the chaebol

Saenuri lays out policies to hem in the chaebol 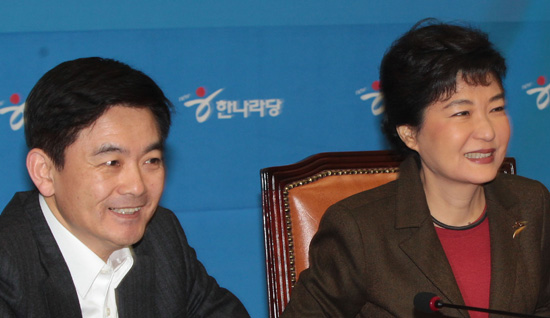 The ruling Saenuri Party’s emergency leadership council adopted new policies yesterday restricting large conglomerates from doing business in areas traditionally dominated by small- and medium-sized businesses and to prevent them from squeezing their contractors and suppliers.

Representative Lee Ju-young, chief policy maker of the Saenuri Party, described the policies as “economic democratization” yesterday at the National Assembly. “After making a pledge for the [April general] election,” he said, “we will try to legislate [the policies] as soon as possible.”

Earlier in the day, Representative Park Geun-hye, interim leader of the party, said it intended to “take measures to prevent and limit all the work going to conglomerates.”

Under the policies, conglomerates that unfairly reduce contractors’ fees will be penalized and required to compensate the contractors for losses by paying them triple the amount of the reduction. If they engage in price-fixing, class action suits may be filed against them.

Another policy limits the types of businesses that large conglomerates can move into to protect small- and medium-sized businesses.

Conglomerates were pressured by the government last month to pull out of businesses like cafes and bakeries after being criticized as threatening small businesses.

Meanwhile, amendments to the existing Monopoly Regulation and Fair Trade Act will be submitted by the party’s interim council in order to put limits on conglomerates’ market shares.

Other measures adopted by the Saenuri Party are routine inspections of the largest 30 corporations in the country that have over 20 percent of their shares held by one family.

The party also called for more public bidding for contracts in areas like systems integration, advertising and construction to improve competitiveness.

Meanwhile, the Yeouido Institute, the party’s policy think tank, conducted a nationwide survey of 3,741 people asking “How ethical are large conglomerates and chaebol?”

According to the results released Monday, 74.4 percent of respondents said they believe them to be “corrupt,” a 4 percent increase since a survey in August 2011 asking the same question.