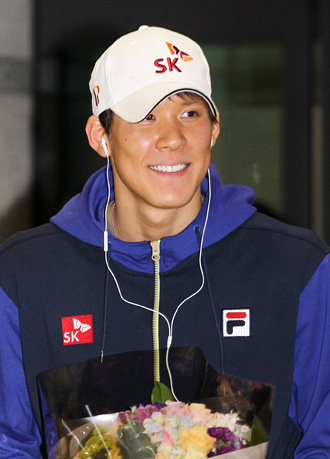 Park Tae-hwan returned to Korea yesterday after proving he is on schedule with his conditioning just months before the start of the 2012 London Olympics.

The swimmer capped off his second overseas training session in Brisbane, Australia, with three gold medlas at the New South Wales State Open Championships in Sydney.

The 22-year-old Korean has been gearing up for the Summer Games with coach Michael Bohl and set the NSW State Open Championship as his first litmus test of the year. Although top-class swimmers didn’t feature in the event, Park impressed in the freestyle races, winning three of his five competitions and placing third and fourth in the other two.

He was dominant throughout the race, leading second-place George O’Brien of Australia by more than 35 seconds. Park’s training partner Lee Hyun-seung took third at 15:27.86.

Park, who won the gold medal in the 1,500 at the 2006 Asian Games, did not compete in the long-distance race at the FINA World Championships in Shanghai last year, focusing instead on shorter races such as the 200 and 400.

At a press conference yesterday, Park announced that he will not participate in the 1,500 at the London Games, but rather competed in the race over the weekend to test his endurance.

Park took bronze in the 50 and finishing fourth in the 100, both short-distance races.

During his stay in Korea, Park, who has studied physical education at Dankook University since 2008, will receive his diploma on Thursday. The university announced yesterday that Park will continue his studies in hopes of earning a Master’s degree in education.

Park will go to Brisbane, Australia, again on Sunday to begin his third overseas training session.