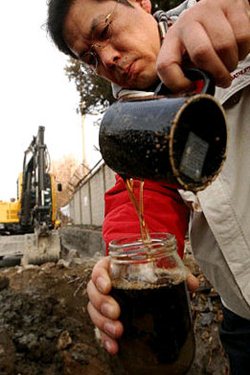 Extensive cleanup work on the polluted areas near a U.S. military zone have come under fire for costing millions of tax dollars every year.

According to the Seoul Metropolitan Government, it will begin the cleanup work to remove polluted underground water near Noksapyeong Subway Station and Camp Kim, the home of the United Service Organizations in Korea that are located adjacent to the U.S. military’s Yongsan Garrison, in central Seoul, this month and continue until February of next year. The city government said that it has spent a total of 3.4 billion won ($3.02 million) for the cleanup since 2001 and has allocated another 500 million won for this year.

The city government said that leaking oil from U.S. military camps - the Yongsan Garrison and the Camp Kim - has permeated the groundwater of these areas.

The government first discovered that groundwater under Noksapyeong Station was polluted by oil in 2001 and has been trying to prevent the diffusion of the polluted water since then. The annual cost for the cleanup in the area has risen to 300 million won, the city government said.

In 2006, the city government said it found additional oil seeping into the groundwater from Camp Kim and it has been monitoring the area since 2008, spending 200 million won annually on cleanup. Officials in the Yongsan District Office said that the work won’t end until the U.S. military completely cleans up the area around the oil tanks inside the camp.

“When we take a look at the direction of the polluted underground water’s flow, we can clearly see that the pollutants are coming out from the military camp,” an official of the Yongsang District Office said. “The U.S. military is against additional cleaning inside the camp because they see it as unnecessary. If the situation continues like this, we have to run the purification process every year until every U.S. military facility is finally handed over to Korea.”