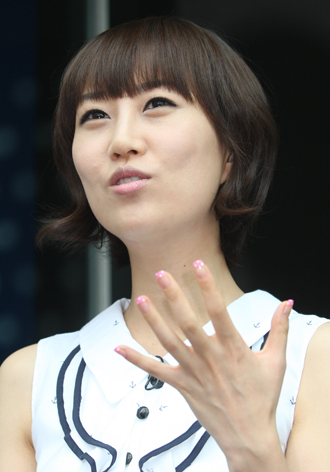 Trot singer Jang Yoon-jung has denied that she is the woman in a photo called “Jang Yoon-jung nude” that is making the rounds on the Web.
The singer’s agency announced on Monday that it is currently in the process of filing a complaint with police and the Korea Communications Commission, claiming that someone edited the photo and pasted Yoon’s body onto a naked female model.
The agency said it will stand firmly against the person who produced and uploaded the picture.
“We will take legal action against the perpetrator if Yoon’s career suffers because of this incident,” said a representative from the agency.
Jang said she is stunned but used humor to mock the situation on Twitter, writing: “I admit the face is 100 percent mine. But the body! I don’t have such a glamorous body. Although I’m laughing at this ridiculous photo, I promise that the person who started all this won’t be laughing by the time we get to the bottom of it.”
Jang made her debut in 1999 and is best known for her hit trot song “Oh My.”