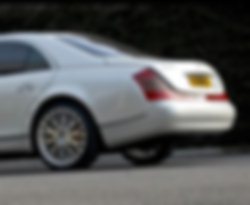 Police say they have busted a car-thief ring that stole and then illegally exported luxury imported vehicles such as Mercedes-Benzes and Porsches.

The police said that one of the stolen cars, a 2011 white Range Rover luxury SUV, worth 145 million won ($129,050), belonged to a Korean pop star surnamed Choi, who is currently serving his military duty in the army.

The police said that Kim planned the thefts and three other accomplices including Lim put the plans into action. The police filed a warrant to detain Kim yesterday and indicted the rest without detention. The police said there are six more accomplices, including a 54-year-old suspect surnamed Jeong, who helped bankroll the criminal ring from outside the country, and it will cooperate with Interpol to arrest them.

A 50-year-old used car dealership worker surnamed Shin had one of her Maybach sedans, worth 350,000 million won, stolen right before her eyes by Kim. He told Shin that he wanted to take a test drive and went out with the car but never came back.

Shin told the police that she didn’t suspect Kim because Lim, who worked in her shop, introduced him as a close acquaintance. Shin called the police four days later but the police found that the car was registered as an export good and had already been transported to Hong Kong. Police said that the celebrity’s Range Rover was being managed by his friend surnamed Lee, who was having financial difficulties at the time. The suspect offered him a loan, told him that he could lend him 10 million won if Lee put the vehicle up as collateral.

The police said that the suspects pretended to be officials working in a dealer shop. The Range Rover was transported with the Maybach to Hong Kong. Police said that Kim had targeted vehicles from online used car Web sites and told his accomplices to visit the shops to steal them. “They visited several dealer shops and asked for a test drive and never came back,” the investigator said.

The police also said that they stole six luxury cars including Mercedes-Benzes, Porsches and Jaguars, worth 1.06 billion won in total, the same way and took them overseas to China and Hong Kong. It said that the suspects had filed fake documents in order to make customs agents think they were selling 1 million won worth of junk cars.

“The suspects knew that the customs service only check goods via documents,” the investigator said. The police said that it will expand its investigation, as they found 50 more e-mails from Kim’s account in which he exchanged information about cars with Jeong.