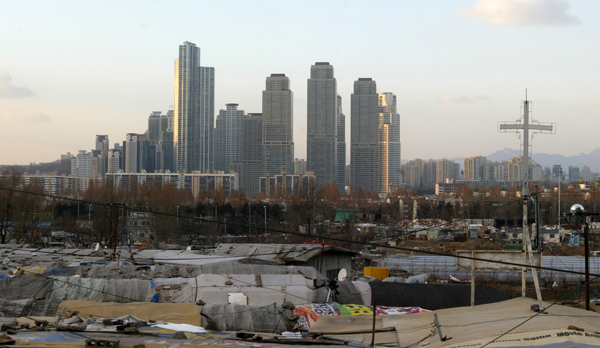 A view of poverty-stricken Guyrong Village, with Samsung Tower Palace, a luxury condominium complex, looming in the background [JoongAng Ilbo]

Within view and in short reach of glitzy, skyscraping apartments priced among the country’s highest, a small village with poverty levels normally associated with the developing world sits incongruously. The houses are built from plywood and tarpaulin. Lavatories are in wooden stalls without plumbing. The lack of organized waste collection is made obvious by the piles of litter and discarded machinery that lay everywhere.

Guyrong Village is a settlement of makeshift housing in Gangnam District, south of the Han River, that was established in 1988 by residents who were pushed out of other informal communities by government agencies seeking to beautify Seoul before the Summer Olympic Games that year. The real estate market exploded soon after in the district and a new city rose around the displaced Seoulites. Yet, village residents have managed to withstand an array of challenges.

“I’ve lived here for 20 years and even basic survival is a struggle,” said Lee Ae-ran. “Cold is the hardest time of year. Everyone is freezing these days.”

Keeping warm is a serious challenge for Guryong residents, many of whom do not have modern heating systems.

Residents are prohibited by district law from building more permanent homes because they don’t own the land they live on. Amenities are sparse throughout the village and a sense of temporality can be felt, despite the settlement’s long history. Nowhere are Seoul’s differences in wealth more apparent than here.

The tough circumstances have given the village’s residents a determined approach to daily life.

Like most residents in Guryong, Park uses coal to heat his home. He said he doesn’t like the smell and mess of coal but can’t afford anything else.

Kim Chang-sik also relies on coal. Each winter he receives 500 coal cartridges from the government. When they run out, he must fend for himself. In the summer, Kim uses his small plot of land to farm lettuce that he then sells for 2,000 won ($1.80) a head. In mid-winter he is idle as his lettuce patch sits empty.

Kim is divorced and lives alone. He never had children.

“If you have children, the government stops giving you money,” he said.

The village, with its flimsy structures, is particularly vulnerable to Seoul’s extreme summer and winter weather.

The heavy rainstorms of July 2011 caused flooding that swept away many of the makeshift homes. In response, a coalition of residents and volunteers worked together to rebuild the area with the help of the government.

Yet that episode of solidarity masks lingering tensions between the village and the city government.

In April 2011, the Seoul Metropolitan Government announced plans for redevelopment by the state-owned SH Construction. It’s part of a larger plan to eventually clear away many low-income areas in Seoul to make way for upscale buildings.

Chilly temperatures aren’t the only concern for Guryong residents.

At 2:50 p.m. on Jan. 27, a large fire broke out in the village. Several houses were damaged leaving many homeless. No one was around at the time of the blaze and no one knows for certain what started it.

Low murmurs said the fire was set intentionally to provide a pretext to move residents out in order to make way for the building of new homes.

“It could have been arson but there’s no evidence for that. We really don’t know what caused the fire, but we are very curious,” said Lee Gang-il, a member of the Guryong Residents Council. “The houses are very old and dry, so they burn very easily.”

The acrid smells of burned wood and melted plastic still hang in the air. Inside the burned houses, charred possessions can be seen: stacks of books, refrigerators full of packaged food, appliances like fans and rice cookers. The residents who lost their homes have been digging through the remains retrieving whatever can be salvaged.

The damaged homes will not be rebuilt and residents will have to move. “The people who are willing to leave will be relocated to housing provided by SH Construction,” said Kim Joong-chul of Gangnam District office, who had come to Guryong village to investigate the scene. “Of course there will be people who won’t want to leave,” he added.

From the ramshackle paths that lie between Guryong’s wood and plastic huts, Gangnam’s skyline of imposing skyscrapers can be seen. It’s uncertain how long the village’s resilient residents will be able to hang on until shiny towers sprout from Guryong’s soil. Yonhap