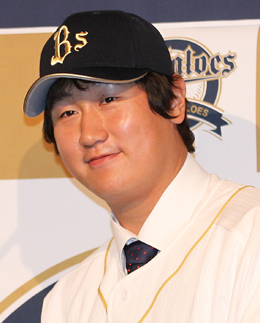 Orix Buffaloes slugger Lee Dae-ho said he can’t believe the reports that match-fixing would have happened in the Korea Baseball Organization, lamenting the turmoil that is spreading the nation’s sports world.

Lee, who will have debut season in Japan’s Nippon Professional Baseball after signing two-year contract with Buffaloes last December, said through Japanese sports daily Sports Nippon yesterday that he has never heard of such corruption happened during his time in Korea.

“I have never heard of such story,” Lee said. “I can’t think of an incident that pitcher would have given up base-on-ball and batters swing their bat deliberately.”

But Lee, who has played in KBO with Busan Lotte Giants for 11 seasons, urged the match-fixing allegations should be fully examined with investigation if it is founded .

“If there was really a manipulation on games, it should be investigated strictly,” Lee said. “However, I just want to believe that nothing has happened.”

Local Prosecutors announced on Wednesday that they haven’t launched investigation on match-rigging scheme in the KBO, although it opened possibility of doing so if they get some strong evidences. However, as the speculation of match-fixing in KBO is growing stronger, many local medias are reporting it’s just a matter of time that prosecutors start to probe such allegation.

While the situation in KBO could disarry him, Lee, the 2010 most valuable player in KBO, is putting his best effort forward at team’s spring camp training in Okinawa. The 29-year-old has been working hard to live up his status as a one of the finest sluggers in Korea, going through diet to make his body healthier. The 194-centimeter tall power batter previously told he lose 15 kilograms and maintains weight around 127 kilograms.

According to Japanese media reports, Lee was excluded from team training yesterday as he suffered minor pain on his left hip after sprint training. However, he is expected to train normally from today since the injury is not severe.

Lee has been showing good signs from past training. On Wednesday, he marked eight home runs at 65 bats during the free batting training session. It was reported that the two-time home run king in KBO concentrated hitting balls on outside track.

“I’m currently working with a mind that a pitch is on the edge of strike zone,” Lee said. “I have been kept batting with this mind since I was in Korea”

Lee is gearing up his condition hard these days because he is scheduled to have first competitive test starting this weekend as Buffaloes have friendly games with Hanshin Tigers tomorrow, followed by Yokohama DeNA Baystars on Sunday. The team, which finished fourth on the Pacific League of NPB last season, will also meet Tokyo Yakult Swallows on Monday and Daegu Samsung Lions, the reigning KBO champion.

It was reported that Buffaloes manager Akinobu Okada already picked Lee as teams’ fourth batter on the lineup and as a first baseman for upcoming games. Okada said he will send Lee often because the Korean needs to experience pitches from various Japanese pitchers in order to get adjusted well.

Lee told he is ready to face such challenge from Japanese pitchers and ready to measure where he stands at this moment.

“My style of adjusting is just challenging aggressively with my own body,” Lee said. “I’m sure I will get used Japanese pitchers’ pitch after this early adjusting period is over.”