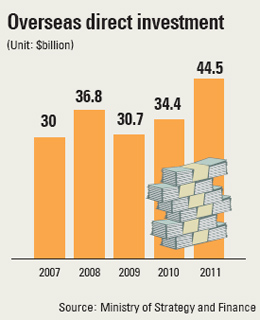 Korea’s overseas direct investment jumped to a record high in 2011 as domestic companies pushed to increase spending on mining and other resource development projects, a government report showed yesterday.

Overseas investment made by Korean companies and individuals amounted to $44.49 billion last year, up 29.5 percent from a year earlier when it stood at $34.36 billion, according to the report by the Ministry of Strategy and Finance.

Overseas direct investment usually refers to spending made by domestic companies and individuals in order to take at least a 10 percent stake in a project or business in another country, the ministry said.

Last year, investment in mining and resource development projects doubled to $20.37 billion from 2010, the report showed.

The U.S. was the top destination for Korea, with $16.43 billion invested in the country. China and Australia came next with $4.87 billion and $4.11 billion, respectively, the report showed.

The lingering euro zone debt crisis, however, led to a decline in investment bound for European countries.

Korea’s investment in the region plunged 44.2 percent on-year to $4.36 billion.

The ministry expects overseas direct investment to continue its upward trajectory this year, driven by more demand for natural resources development and other business opportunities.

“Global fiscal troubles and a possible economic slowdown in emerging countries are aggravating uncertainties over the investment environment,” the ministry said.

“Still, overseas direct investment will likely maintain its upward trend this year thanks to Korean companies’ expanded investment for overseas mergers and acquisitions, and greater spending on natural resources development projects,” it added.