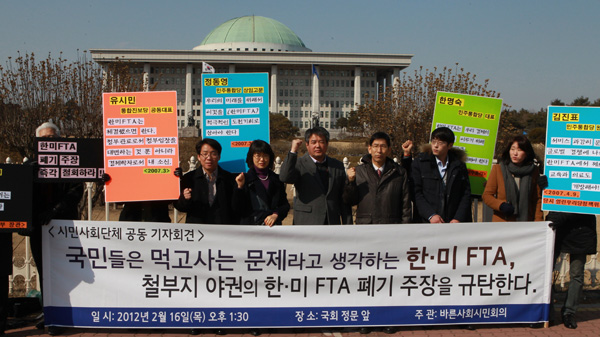 Leaders of 48 civic groups hold a news conference yesterday in front of the National Assembly to urge the opposition Democratic United Party to backtrack on its pledge to scrap the free trade agreement with the United States if the party wins the presidential election. By Kim Hyung-soo

The chief policy manager of the Democratic United Party said renegotiating the Korea-U.S. free trade agreement is its main goal, not its immediate scrapping, as the largest opposition party faces public backlash over its threat to pull the plug on the treaty if it gains power.

The ruling Saenuri Party sharpened its attacks on the DUP by releasing results of a poll yesterday suggesting the majority of Koreans disapprove of the DUP’s threat.

“Coming up with an FTA that helps the national interest through renegotiations is our consistent stance,” said Lee Yong-sup, the DUP’s policy committee head, at a committee meeting held at the National Assembly yesterday.

“Our demand that the government stop the procedures to implement [the pact] is a bid to make it easier to re-renegotiate it under the next government,” he said.

The 2007 pact was signed under the Roh Moo-hyun administration and the Uri Party, a predecessor of the DUP, and then renegotiated with Washington in late 2010. It is expected to take effect as early as this month.

On Feb. 8, DUP Chairwoman Han Myeong-sook said her party would scrap the treaty upon winning power unless several “poison clauses” were modified. Since then, Han has avoided further comments on the issue.

At a press conference on Wednesday, Han responded to a question on the FTA by saying, “People should not entrust power to a political force that supports an FTA that is of no help to the working class.”

According to policy manager Lee, Han’s strong statement on Feb. 8 was meant to highlight the Lee Myung-bak administration’s refusal to demand further renegotiations with Washington. He said the party considered that scrapping the FTA would better serve the national interest than implementing it in its current form.

Representative Kwon Young-se, Saenuri’s secretary general, said in an interview with Yonhap News Agency yesterday that the DUP’s opposition to the Korea-U.S. FTA is based on anti-U.S. sentiment. “There are other free trade agreements for Korea such as the Korea-EU FTA, but it only takes issue with the Korea-U.S. FTA,” Kwon told Yonhap. “Korea’s dependence on trade is enormously high, and it makes no sense that it should live with its doors shut.”

The Yeouido Institute, Saenuri’s think tank, announced yesterday the results of a survey it conducted of 3,521 adults across the country on Feb. 13, in which 50.5 percent of the respondents said that losses will be larger than gains if the Korea-U.S. FTA were abolished, while 33.2 percent said the opposite.

The survey also asked whether the opposition’s position on the FTA was desirable or not, and 56.4 percent of respondents said it wasn’t, compared to 37.4 percent who said it was.