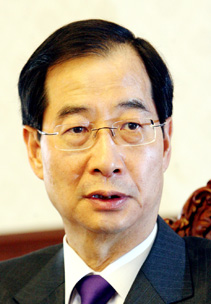 Korea’s top envoy to Washington announced his sudden resignation yesterday, and no one in the government is saying why, resulting in rampant speculation.

Han Duck-soo, Korea’s ambassador to the United States, tendered his resignation early yesterday, Ministry of Foreign Affairs and Trade spokesman Cho Byung-jae told a media briefing later in the day. Cho did not give an explanation of why Cho resigned.

Han, who served as prime minister in the Roh Moo-hyun administration, is considered to have played a crucial role in bringing the Seoul-Washington alliance to an almost historic high and helping successfully settle the protracted negotiations over a bilateral free trade agreement.

Han came to Seoul Sunday ahead of the annual gathering of the heads of Korea’s overseas diplomatic posts, which will be held in the Korean capital from Feb. 20 to 24. The ministry had arranged a meeting between him and reporters on Feb. 24.

Instead, he will return to the U.S. today to prepare for his departure, the ministry said.

A government official told the JoongAng Ilbo that Han met President Lee Myung-bak early this week. The official claimed there was good news for Han at the meeting, suggesting his was not a forced resignation.

Some local media speculated that Han was offered the post of chairman of the Korea International Trade Association. Sakong Il, the current KITA chairman and a close aide to President Lee, said he would not seek reappointment to the post early this month. He may be Han’s replacement as Korean ambassador to Washington, media speculated.

According to a source, Han had expressed his intention to resign since the ratification of the Korea-U.S. FTA bill in the U.S. Congress during a state visit by President Lee last October.

A Blue House official, speaking to Yonhap News Agency yesterday, denied speculation that Han’s resignation was related to an unknown problem regarding the Korea-U.S. FTA. Yonhap also reported, citing unnamed sources, that Han is not trying to run in the April 11 general election.