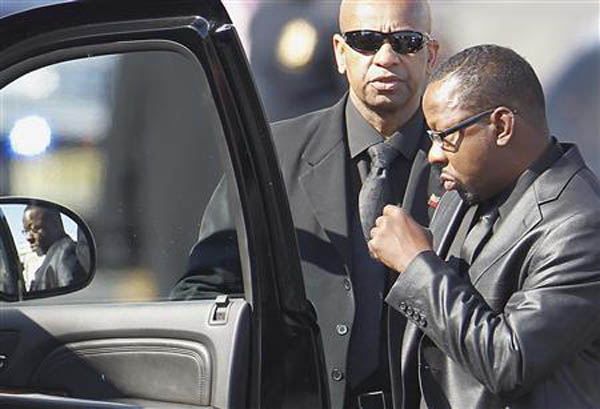 NEW YORK - Singer Bobby Brown abruptly left the funeral of his ex-wife Whitney Houston on Saturday, claiming security guards asked him to move and prevented him from seeing his and Houston’s daughter.

Brown said in a statement that upon arriving to the service he was moved three times by security, who also refused to allow him to his daughter with Houston, Bobbi Kristina Brown, 18.

Brown and Houston divorced in 2007 after a 15-year turbulent marriage as portrayed in a reality TV series, “Being Bobby Brown” that showed an affectionate yet troubled relationship.

“I fail to understand why security treated my family this way and continue to ask us and no one else to move,” he said. “In light of the events, I gave a kiss to the casket of my ex-wife and departed as I refused to create a scene. My children are completely distraught over the events.”

Brown said Houston, who died a still unexplained death at age 48 one week ago in a Beverly Hills hotel room, would have preferred he attended.

“This was a day to honor Whitney. I doubt Whitney would have wanted this to occur. I will continue to pay my respects to my ex-wife the best way I know how,” he said. Reuters