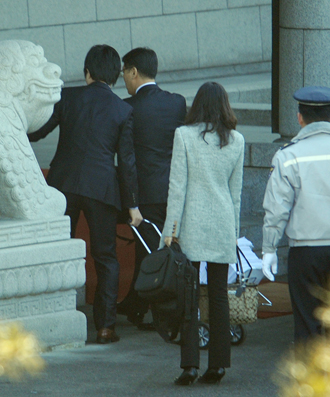 Prosecutors visit the official residence of National Assembly Speaker Park Hee-tae yesterday for questioning over his involvement in a money-for-vote scandal in the leadership election of the ruling party in 2008, in Hannam-dong, central Seoul.

The questioning, which is rare in Korean politics, comes almost seven weeks after prosecutors launched an investigation into allegations that Park bribed fellow lawmakers and other party members in a bid to muster votes for the 2008 chairmanship election for the then-Grand National Party, now renamed the Saenuri Party.

Instead of summoning the incumbent National Assembly speaker, three senior prosecutors visited his residence for questioning as a show of respect and began their investigation at 10 a.m.

In the investigation, Park reportedly stated that he did not know cash envelopes were delivered to fellow lawmakers in the 2008 chairmanship election and he came to know the case as his aides told him about it after he returned from an overseas trip on Jan. 11 of this year.

Park submitted a letter of resignation last week and is awaiting approval from the National Assembly.

The 74-year-old Park had strongly denied the vote-buying allegations, but he offered to resign from his post and apologized to the people amid rising suspicions.