No school on Saturdays shakes things up

No school on Saturdays shakes things up 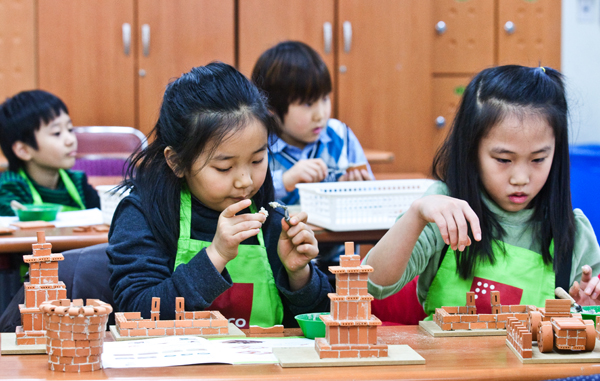 Students build houses and towers with brick parts in an architecture class as a part of a Saturday program held at Songpa District’s Sports and Culture Center in southeastern Seoul on Feb. 11. Parents face the predicament of five-day school weeks in the new school semester and are looking for alternatives to Saturday classes. By Kim Seong-ryong

Come March, a five-day school week will be implemented for elementary, middle and high schools nationwide. Students will no longer go to schools on Saturday, which will lead to a lifestyle change for parents who had depended on their child being at school on that day. Before, students had every other Saturday off.

Kim Ju-hyeon, 36, who lives in Geumho-dong, central Seoul, and has a son in the second grade of elementary school, is in a predicament as the spring semester starts next month because of the newly implemented five-day school schedule.

Both Kim, who works for a distributor company, and her husband, who is a self-employed businessman, work on Saturdays. Now, since their son will no longer attend school on Saturdays, they need to find an alternative means of child care.

Kim stated, “When the five-day school week begins, I heard schools might provide programs in lieu of classes, but I haven’t heard any updates.” She now is looking into sending her son to art or music private academies. Her son’s school expressed, “A Saturday program has not been confirmed hence we are not able to provide parents with guidance.”

Some parents look forward to some quality family time together, and a mother of three, 37-year-old Hwang In-sun stated, “Last year, my husband rested on Saturdays and my children were at school, so it was difficult to gather together.”

She plans on going on family trips and doing volunteer work starting from this year with their children who are in middle and elementary school.

But in general, both schools and parents who work on Saturdays are not ready for the five-day school week.

The JoongAng Ilbo’s reporters surveyed 20 elementary, middle and high schools in Seoul last week, but there was not a single school that had a plan for Saturday. The Ministry of Education, Science and Technology proposed plans for student care classes, after school programs and sports days last year, but the programs have not come to fruition.

The schools claimed the “district government’s decision for the budget has been postponed.”

The principal of an elementary school in Dongdaemun District, eastern Seoul, said, “The district office has decided on the money allocated for education, but the schools have not been notified of the amount allocated for each school yet,” and surmises that the Saturday programs will begin in late March.

One vice principal of a middle school in Nowon District, northern Seoul, stated, “For the moment, we’re gathering the faculty’s opinions.”

Parents are thus expressing that they are frustrated.

Kim Myeong-ok is a 40-year-old single mother who has a son that is in his third year of middle school.

But even over the past year, during every other Saturday that her son had off, she had often left him at home by himself because “there was nowhere she could really send him” and worried that “this year, I’m not sure what to do.”

In preparation for the five-day school week, the Ministry of Education, Science and Technology held a trial run with 629 elementary, middle and high school students, or 7 percent of schools nationwide. These schools encouraged active participation from parents and faculty to implement activities and entertaining programs for the students on Saturday. At Sunrin Elementary School, parents volunteered on Saturdays to teach art, music, and taekwondo.

No school on Saturdays is also an opportunity for hagwon, private academies, to come up with strategies to target students whose parents have no place to send them. Meanwhile, the leisure industry foresees weekend family trips to be on the rise and is preparing for the increase.